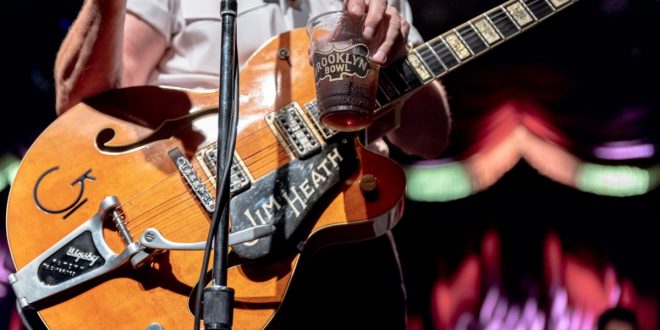 It was a psychobilly freakout Friday night as The Reverend Horton Heat brought their fine blend of country style rockabilly surf rock to a packed crowd at the Brooklyn Bowl in Brooklyn, New York.  As the Reverend Jim Heath, Jimbo Wallace, RJ Contreras and Tim Alexander took to a fiery stage that was already heated up by special guest Lara Hope & The Ark-Tones earlier that evening, and the Reverend wasted no time fueling that fire with a shot as they opened their set with “Bullet” follow right behind with “Baddest of the Bad“. With the crowd already all revved up, the Reverend Jim would only fuel that fire more as he yelled out to the crowd “It’s a Psychobilly Freakout!” Which sent the crowd into a frenzy and from there the band continued on blazing the stage with song after song while taking breaks in between  to share tales of the road and laughs with the fans before coming to what was clearly the crowds favorite “Jimbo Song”. After knocking off a few more songs it was time for the band to welcome out to the stage a familiar face, special guest Big Sandy.

After a 7 song set of hits from Big Sandy it was back to the Reverend leading the way with “Whole New Life” before another fan favorite “Let Me Teach You How To Eat” followed by “400 Bucks” it was a familiar tale of meeting Lemmy Kilmister, then closing out their hour and a half long set with a cover of Motörhead’s “Ace of Spades”.

The crowd cheered as the band made their exit from the stage, with the lights still dark and fans chanting  one more song, one more song, the Reverend Jim Heath, Jimbo Wallace, RJ Contreras and Tim Alexander would make their way back to the stage for an encore of “It’s Martini Time” and after it was time to be taken to the “School of Rock and Roll”. And with a toast to the crowd and a good night the band made their final exit from the stage.

As always with The Reverend Horton Heat it was a evening filled with smiles, stories, laughs and some good ol rock’n’roll music.

NewYork Based Photographer. Music Enthusiast with a background in Graphic Design. Whether I'm shooting a live event or just out wondering the streets its about capturing the moment.
Previous Gallery: Sum 41 at Brooklyn Bowl in Las Vegas, NV 05/24/18
Next Interview: VISTA – “Tour is a weird process. You drive a lot to hop on stage for 30-40 minutes every night, but I can’t see myself doing anything else.”