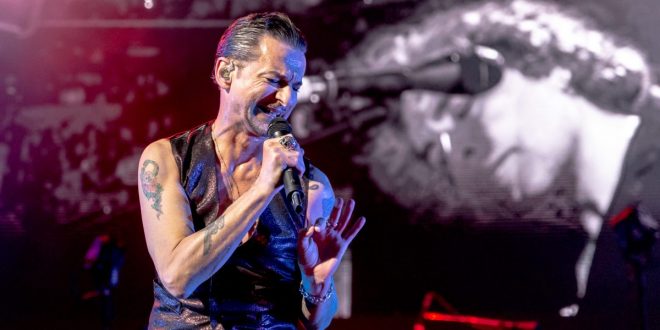 Wednesday, Depeche Mode returned to New York for the second leg of their North American Global Spirits Tour this time making their stop at the Barclays Center in Brooklyn, New York. The evening began with special guest EMA, a South Dakota born singer/producer who recently toured with Depeche Mode on their European Tour early this year. With the lines outside to get in being a bit long and under staffed, I’m sure such as myself most of the audience missed her set all together. As the arena filled with fans from all walks anxiously awaited for the alternative pop icons to take the stage, the Swiss watchmaker Hublot who recently partnered with Depeche Mode to raise money and awareness for Charity Water would first take the stage to present a check on behalf of themselves and Depeche Mode to the organization for 1.7 million dollars so that countries that are without clean water can be provided the clean and safe drinking water needed to survive.

As “Revolution” from The Beatles played over the arenas P.A. you could feel the anticipation of the fans knowing the time was just around the corner, with “Cover Me” now on the P.A. the lights in the arena went off and the crowd roared as Martin Gore and Andrew Fletcher along with backup musicians Pete Gordeno and Christian Eigner, while Dave Gahan made his entrance separate from the others on walkway above the drum riser that stretched the length of the full size LED screen that was the backdrop of the stage that display vibrant colors, videos for the songs and of the live performance of the show. With the start of “Going Backwards” Gahan danced his way to center stage as the crowd cheered for the frontman. Through out the bands flawless two hour set fans cheered in small burst as the charismatic Gahan danced his way around the stage and at times joking with the fans by making faces and gesturing to them as if he was shunning them away or brushing them off his shoulders. With the crowd loving every minute of the amazing performance it wasn’t really until the band played some of the more stronger fan favorites such as “Precious, Where’s the Revolution and Everything Counts” that the crowd actually realized the amazingness they were witnessing. It wasn’t until Gore struck that first note of “Enjoy the Silence” that the entire arena was on it’s feet cheering at a defining tone and siang along to the chorus as Gahan held his arms out open and from there it wouldn’t stop as they then went onto play one of my personal favorites “Never Let Me Down Again” before leaving the stage only to return for their encore with an acoustic version of “I want You Now” before playing “Walking in My Shoes” which proved to be a strong favorite among the crowd followed by “A Question of Time” and finally ending a stellar performance with the 80’s cult classic hit “Personal Jesus” that had the crowd singing along at such a high pitch where at times it was hard to actually hear Gahan”s voice overing the defining crowd at the Barclays Center.

With the show now over and the crowd spilling out of every exit of the arena to the streets you could hear the chatter from fans as they praised the band for an amazing show and how it sounded so good. There was also plenty of chatter all over social media on how people were bummed on missing out on the show, and exactly what they did “Missed Out” on an amazing performance from the Iconic Depeche Mode.

NewYork Based Photographer. Music Enthusiast with a background in Graphic Design. Whether I'm shooting a live event or just out wondering the streets its about capturing the moment.
Previous Gallery: Iya Terra at The Hard Rock Hotel and Casino in Las Vegas, NV 05/23/18
Next Interview with Shim Moore on upcoming solo album: “If you like Sick Puppies, you’ll like this album. I guarantee it.”