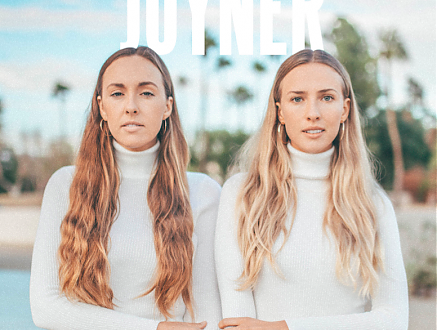 Out of a foggy haze not unlike the one sitting on the shoulders of the city of angels, a stoic piano chimes against a foreboding backdrop. A beautiful voice penetrates the black and white with a splash of neon color, and soon she’s joined by another. A mischievous beat sets up a slow swaying tempo. As much as our soundtrack is moving forwards, our mind is straying towards the back. There’s danger abound; “I’ve been bad, but never this bad before…” our singers tell us, sending chills down our spine the way only good music can. This is just a taste of the new single, “White Lights,” from JOYNER’S new, self-titled extended play. Set to be released this coming week, JOYNER’S evocative, stimulating collection of sonic accents is wonderfully captured in three other songs in addition to “White Lights” with “Baby How Was Your Day?,” “Blue Love,” and “Welcome to Your Life You’re a Star,” each offering an exclusive peek at the hottest debuting indie pop/rock act in southern California right now.

“Baby How Was Your Day” is a vulnerable, carefully assembled ballad that starts somberly but soon breaks out into a glowing, sincere celebration of love and human connection. Bound by a passionate connection, we listen to the story of two people coexisting in total synchronicity; a telepathic kind of relation to one another that exists between two committed lovers. The words “See me in your mind now/Always on your mind now,” ring so true against the sprawling soundscape created by the bass heavy synthesizers. Even in their biting delivery, the lyrics manage to remain quite playful and affectionate, and it’s hard not to fall in love with their openness.

“Welcome To Your Life You’re a Star” starts off humbly enough with a slow picking acoustic guitar that is joined by an irreverent perspective of budding adulthood in the rat race of Los Angeles. “They don’t know about the things we do,” the chorus chants, as if to include the listener in JOYNER’S bittersweet secrets. Led by a casual finger snapping, the beat is eclectic and somewhat introspective in its pace. As the track begins to fade away, there’s a lingering note that seems to last forever, as endless as the possibilities that a city like L.A. can hold for those who seek its glory.

The most intensely alluring song on JOYNER, at least for this writer, is “Blue Love,” an extremely mature and transcendent experiment in 21st century shoegaze. Enigmatic pleas for a different kind of existence, one where loneliness and emotional isolation doesn’t exist, and instead we can always be on each other’s level, much like the life described in “Baby How Was Your Day.” This poetic, trip-hoppy yearning is intoxicatingly good, even if you’re not a big fan of pop music. JOYNER’s larger-than-life vocals aren’t presented in a pool of overproduced, pitch-corrected white noise. They’re as clear as a pristine lake and as elegant as an ancient palace. From start to finish, JOYNER is as pleasing to the ear as it is intellectually mesmerizing, and the two musicians behind it have set a fine example of how to make a smashing debut release.

Stephen Vicino is the founder of MusicExistence.com. He created this site to give talented musicians a voice and a way to be discovered.
@@svicino
Previous Tom Rawling’s Old Ladies Peep Show Is Coming To Town!
Next ECHOGLASS Break Musical Boundaries : One To Watch! 22:07May 20, 2018