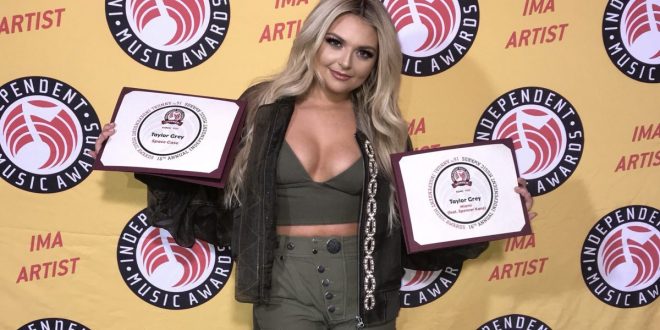 “It’s such an honor to be recognized by the Independent Music Awards for my work! Being nominated for two awards was amazing in and of itself but taking both home just blows my mind!”  – Taylor Grey

Taylor Grey’s debut album, Space Case, was released last summer and features collaborations with Brad Simpson (The Vamps) and singer Spencer Kane.  The first single from the album, “Never Woulda Letcha,” and the follow up single, “Miami,” both have over 1 million views on YouTube.  Space Case was produced by Josh Abraham (P!nk, Kelly Clarkson, Thirty Seconds to Mars, and Shakira), David Kunico (Dierks Bentley, Alicia Keys, Selena Gomez) and Nico Stadi and demonstrates Taylor’s uncanny ability to sing of self-awareness and introspection, while maintaining a positive and bright melodic and rhythmic feel. Her most recent single, “Poison,” is perhaps her most honest and emotionally evolved track that explores and exposes her vulnerability as a songwriter.  The song has been well received and has been played on national radio.

Now in its 17th year, The Independent Music Awards, produced by Music Resource Group honor the year’s most exceptional & artistically daring music projects from self-released and indie label talent from around the globe. And connects them to new performance, promotion, distribution and fans.

Program winners and nominees include extraordinary artists at every stage of their careers and include Amy Lee, Masta Ace, Valerie June, Meghan Trainor, Passenger, Jackson Browne, Team Me, Radio Radio, …And You Will Know Us by the Trail of Dead, Girl In A Coma, Apples in stereo, Pokey LaFarge, Killer Mike among many more.

More information is available at www.IndependentMusicAwards.com