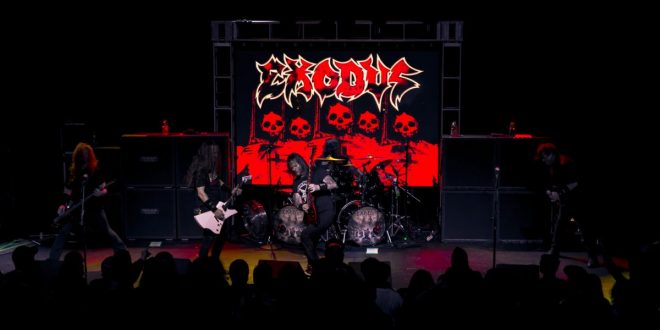 After having to cancel last Wednesday’s show in NYC do to an untimely storm from Mother Nature Mr. Pickles Thrash-Tacular Tour made it’s stop the following night at TLA in Philadelphia. For those of you unfamiliar with who Mr. Pickles actually is he’s an animated dog on the Cartoon Networks Adult Swim. The tour features both Municipal Waste and Exodus. Two bands that I couldn’t see more fitting for one and other.

The night would start off with the local Philadelphia based Brain Candle followed by the Virginia thrash metal punks Municipal Waste who wasted no time jumping right into Breathe Grease the first track off their 2017 LP “Slime and Punishment”. The bands live in your face intensity had the crowd in a frenzy with bodies immediately flying over the barricade at the stage. With a quick introduction to the next song it was back to full speed with Mind Eraser and without taking a breathe the band powered their way right into You’re Cut Off. With the crowd chanting “Municipal Waste is gonna fuck you up” the band went on ripping through a 45 minute set filled with heavy hitting classics like Unleash the Bastards, Sadistic Magician, Headbanger Face Rip and The Art of Parting before closing their set with the classic hit song Born to Party.

With the crowd already thrash happy from the awesome performance Municipal Waste gave us the time had arrived for the All Time Bay Area Thrash Legends themselves Exodus to take the stage along with the founding father the riff master himself Gary Holt. Immediately the crowd went back into a thrashing frenzy as soon as the first cord of their 1985 classic hit Bonded by Blood was struck along with the volume in the building being pushed with the crowd singing along to the chorus. After melting everyones face off with just the first song it was onto their 2014 title track Blood In, Blood Out. From there the friendly violence would not let up for a second as the bodies were tossed over the barricade some were greeted with high fives from vocalist Steve “Zetro” Souza.  Introducing Fabulous Disaster “Zetro” cracked a joke about New York canceling the show do to the snow fueling the frenzied crowd he then stated “We knew Philly wouldn’t cancel an Exodus show” he would then go to say they would be keeping mostly old school through out the night. During their hour long set the thrash legends would destroy TLA with an onslaught of their most iconic hits which included A Lesson in Violence, Blacklist, The Toxic Waltz and closing the night with the famous Strike of the Beast. I have to say it was a complete pleasure seeing Gary Holt back on stage with his baby Exodus and in a smaller venue setting.

NewYork Based Photographer. Music Enthusiast with a background in Graphic Design. Whether I'm shooting a live event or just out wondering the streets its about capturing the moment.
Previous Gallery: Flogging Molly at Revolution Live, Ft. Lauderdale, FL 3/4/2018
Next GALLERY: MUNICIPAL WASTE AT TLA PHILADELPHIA, PA. 3/8/2018