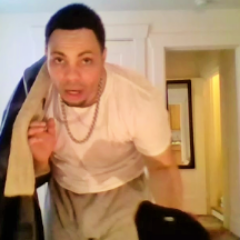 LazerBeam The Legendary Cold Survivor – The Wake Up Call

Maurice D. Berry was born on 7/18/1981 and is also known as LazerBeam The Legendary Cold Survivor he’s a American Rapper, Music producer and Composer from Tacoma, WA. Since the age of fifteen yrs old Maurice D. Berry has been composing music, writing lyrics and recording his voice to his instrumentals. His first recording was recorded to tape on a Karaoke machine he was 13 yrs old. Maurice moved out of his moms house at the age of 16 yrs old he sold drugs, and worked a full time job but after the break up between him and his girlfriend he decided to move back to Tacoma, WA to live with His mom Janice Renee Carson there is where he composed, wrote and recorded The Wake Up Call the instrumental was composed on a Concertmate keyboard that he bought from his older brothers childhood friend for $120.00.

Stephen Vicino is the founder of MusicExistence.com. He created this site to give talented musicians a voice and a way to be discovered.
@@svicino
Previous Rossemberg Maza’s Naughty Romp Through Amsterdam in ‘Eat It Too (Cake)’ Video
Next Album Review: Judas Priest – Firepower