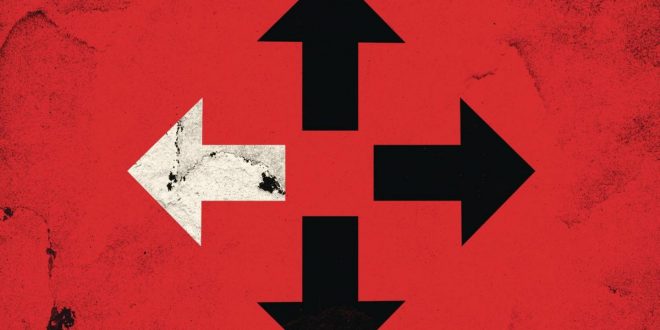 Canadian band Three Days Grace released their sixth studio album Outsider today, March 9, via RCA Records. This is the band’s second record to feature Matt Walst as their lead vocalist since the departure of Adam Gontier in early 2013.

Outsider heavily reflects the band’s journey over the years and how they’re always moving forward in life; a theme covered in the album’s entirety as stated by bassist Brad Walst in the band’s press release. The album was recorded in Jukasa Studios with the same production team from when the band was working on One-X. The team consisted of Gavin Brown and Howard Benson as the producers, engineer Mike Plotnikoff, and mixer Chris Lord-Alge. With this record, Three Days Grace didn’t hold back at all and they really stepped outside of their comfort zone (no pun intended).

Outsider starts off with their current single “Right Left Wrong,” a strong introduction to their new sound. The track is immediately followed up with “The Mountain,” the first single off the album. “The Mountain” is not only a catchy song, but it’s filled with empowering lyrics. As for “I Am an Outsider,” it’s a great anthem for those who march to their own drum. “Infra-Red,” Outsider’s fourth track, has a chorus and melody that will haunt the back of your mind, so listen with caution. The following track, “Nothing to Lose but You,” is the album’s more emotional song and it definitely tugs at the heartstrings. It’s the song that leaves you thinking about your loved ones. However, “Me Against You”  is the exact opposite—it is a middle finger to “the haters.” The song has a catchy heavy beat, complements of drummer Neil Sanderson and Brad Walst, and it has a Nine Inch Nails feel to it as well.

The album continues with “Love Me or Leave Me,” one of their slower tracks filled with heavy electronic beats that harmonize beautifully with the accompanying instrumentals. Guitarist Barry Stock unleashes his incredible signature riffs in a sweeping rhythm in the introduction for “Strange Days,” accompanied by crashing beats from Sanderson. “Villain I’m Not” has a small hint of some Bring Me the Horizon influence, featuring strong vocals from Matt and great instrumentals that have a steady combination of slow and fast. “Chasing the First Time” has a similar intro to that of “Chalk Outline” from the band’s fourth studio album Transit of Venus, but the electronics and guitars are a tad bit heavier on this track.

The lyrics for the eleventh track “The New Real” strongly reflects the times we are currently living in, constantly glued to social media and using it as a crutch. “The Abyss” ends the album on a slow and crushing note featuring a nice surprise of Matt’s screams, something fans have heard at Three Days Grace shows from his previous days with My Darkest Days.

Outsider is the heavy/angst-filled follow-up fans were hoping to have again and Three Days Grace exceeded that expectation, leaving us pleasantly surprised. Three Days Grace has a few festival dates lined up and they will be joining Avenged Sevenfold and Prophets of Rage in their summer End of the World Tour. Outsider is now available at your local retailer and further information on Three Days Grace’s tour dates can be found on their official website here.

After she first fell in love with the concert scene in early 2013, Kate picked up a strong passion for concert photography, having taken classes in high school. She can be seen swiftly maneuvering in the photo pit, capturing those live shots that bring joy to all of us. When she's not in the photo pit, she's either sitting on her porch, watching the beautiful Virginia sunset or watching her puppies play in the grass. Or she can be found in her Bat Cave, editing and writing away, sipping on a large cup of coffee.
@kdrexphotos
Previous Toothless Release New Single “Bridges” and Announce Red EP
Next Used To Love You