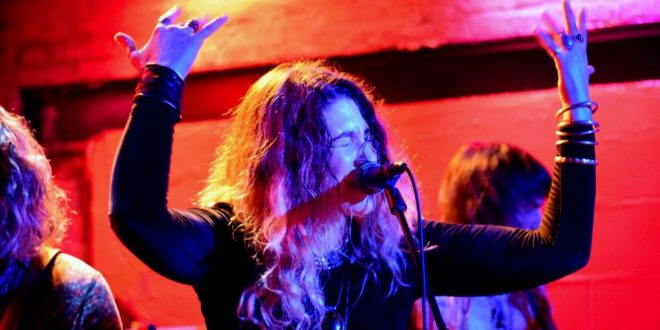 For as long as I can remember, music has been an integral part of my life and growing up I was exposed to all sorts of styles, across all eras. I remember always wondering what it would be like to witness the greats such as Janis Joplin, The Doors, Led Zeppelin, Jimi Hendrix, and Jefferson Airplane live in concert. These musicians were pioneers and paved the way for many of the artists we now have come to know and love, which brings me to my most recent concert experience.

On February 10th, I found myself making my way to the Rockwood through the rain-drenched streets of New York City. I was questioning my life choices when I realized I was going to be looking for parking at midnight on a weekend, but I digress. Once inside the venue, I was slapped in the face by the humidity that had accumulated within the walls and glass panes of Stage One at the Rockwood. I needed to find that sweet spot within the eager crowd where I could see and hear everything unobstructed and the moment The Damn Truth struck the first notes that sweet spot became upfront and center.

The Montreal natives were making their New York City debut at the Rockwood that night and brought down the house with a rollercoaster ride through the long-gone decades of the past. I felt like I was finally witnessing original classic rock music and soaking it all in. The chemistry between the bandmates was palpable and it radiated off the stage and into the crowd. Vocalist-guitarist Lee-La Baum has this intensity about her that pulls you in and keeps you locked onto the performance. Lead guitarist Tom Shemer, drummer Dave Traina, and bassist PY Letellier were equally as hypnotic. There were moments within the set when Baum and Shemer practically played on each other, the passion these musicians feel for the music just oozing with every riff.

With each song they played I fell further in love with The Damn Truth. They brought the sixties soulful essence to life and it shone bright with each track they performed. The audience ate up the entire set, people were dancing, cheering, just having an all around great time. At the end of the night everyone from the band and the crowd was drenched in sweat and craving the next NYC tour stop from this band. I would like to call that a successful New York City debut and that was The Damn Truth.

Concert lover, music fanatic. If it sounds good to me, the rest doesn't matter.
@njaziaddict
Previous Coheed and Cambria and Taking Back Sunday Announce US Summer Co-Headline Tour
Next DIAMANTE REVEALS THELMA AND LOUISE-INSPIRED MUSIC VIDEO FOR “HAD ENOUGH”