Home / News / Kitaro’s Magnificent Music and Film Production “Kojiki and the Universe” Tour Comes to California and The Pacific Northwest. 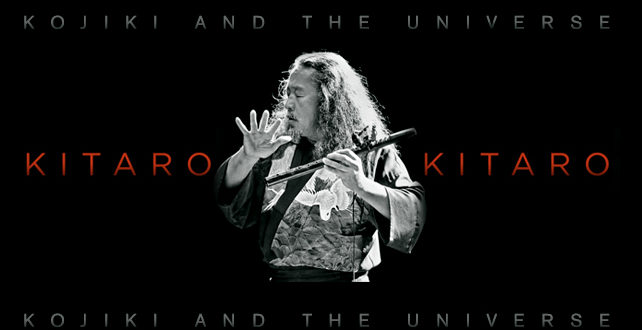 Kitaro’s Magnificent Music and Film Production “Kojiki and the Universe” Tour Comes to California and The Pacific Northwest.

Kitaro’s Magnificent Music and Film Production “Kojiki and the Universe” Tour Comes to California and The Pacific Northwest. Stage Show Combines The Live Music Of Kitaro With A Visually Moving Astronomical Experience

Presenting a totally unique visual experience, the presentation of “Kojiki and The Universe” merges Kitaro’s music for the show (his most notable songs as well as songs from “Kojiki”, his 1990 Grammy Nominated album) with dynamic space-age photographic scenes of the Universe. The awesome visuals feature time-lapse images, expertly intertwined with real-time films provided by, and in cooperation with, NASA and Kyoto University. Watch the tour trailer here: http://bit.ly/UniverseTour

“Kojiki and The Universe” was created by Kitaro in collaboration with Astronomy Professor Kazunari Shibata. The entire production of Kojiki and the Universe was developed using modern film editing techniques, as well as state-of-the-art hardware and software. In Japanese mythology, Kojiki is a story closely related to evolution of the universe. It describes the origin of Heaven, Earth and the creation of the Gods. Utilizing Kitaro’s album as the soundtrack, “Kojiki and The Universe” is a chronicle of astronomical research as well as a beautiful introduction to modern astronomy for everyone. Here’s an example of one of the scenes from the show: http://bit.ly/2z3bw3x

Stephen Vicino is the founder of MusicExistence.com. He created this site to give talented musicians a voice and a way to be discovered.
@@svicino
Previous Gallery: Nothing More Live At The Van Buren In Phoenix, AZ 10/25/17
Next Gallery: The Front Bottoms at Metro in Chicago, Il 10.26.17