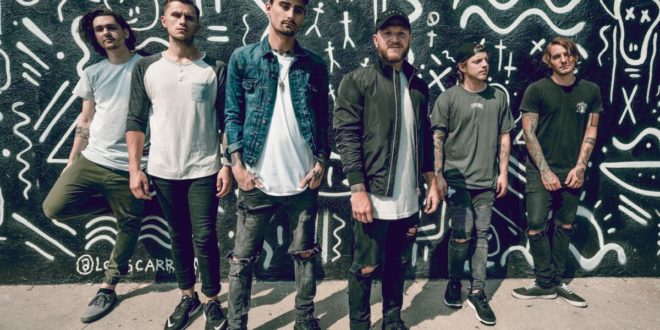 Album Review: We Came As Romans – Cold Like War

It’s been two years since We Came As Romans‘ previous self-titled album, and it appears they’ve had a lot on their plate in that time. The Michigan based band have changed record labels, booking agents, and line-ups. But this month, they’ve returned with their follow-up, Cold Like War.

The band has said this record is about struggle and overcoming adversity “to find the right path” through a difficult time. Cold Like War appears to honestly cover the full extent of their troubles, from their trials to their successes.

“Vultures With Clipped Wings” starts the album with a very strong sentiment, “I never found peace but now I’m fighting a war.” It’s a decent hardcore song, and introduces those key concepts of struggle, which run throughout this record.

“Cold Like War” gives the album its title and brings a smooth, silky chorus that contrasts from the rougher verses.

“Two Hands” is about release and letting something or someone go. It’s a beautifully written song, both very personal yet relatable to the listener.

It’s followed by “Lost in the Moment,” an overall quite depressing song about seeking escape from life’s problems. “Wasted Age” is an angry and satisfying listening experience.

“Foreign Fire” is an interesting song which sounds like we’re only hearing one half of a conversation. When we do hear a potential other side of the dialogue, the female voice is distant and distorted, as if the narrator is already too far gone – “You don’t have to stay and wonder what I’ve become.”

“Encoder” brings dubstep vibes that wouldn’t be out of place on a Transformers soundtrack; it’s super fun to listen to. “If There’s Nothing To See” is is a classic metalcore style song, with fast guitar riffs. “Promise Me” is a welcome cool down, bringing a simpler, lighter beat.

“Learning to Survive” is the culmination of this album, and brings together the message that runs throughout Cold Like War. We Came As Romans wanted to make an album about overcoming their issues, and this song ties together all the other songs’ common themes.

Cold Like War has found that balance between familiarity and intimacy. Energetic tunes stop the album from becoming stagnant or dull, and the song styles are varied to keep the pace going.

We Came As Romans have created a record which fans and those unfamiliar with the band can enjoy alike.

Watch the video for “Foreign Fire”:

Find We Came As Romans on social media:

Freelance arts, culture, and music journalist. Lots of words and some radio. Studying for an MA in Media and Journalism. Trying their best.
@lozreviews
Previous Gallery: Hanson at The Pageant in St. Louis, MO on 10.11.17
Next Gallery and Review: Stone Sour in Tulsa, OK at Brady Theater 10/11/17