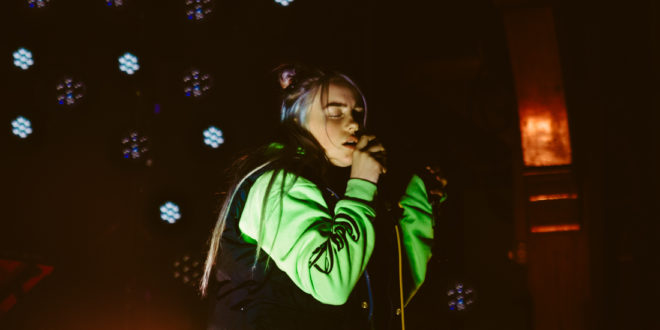 If there’s one way to fire up a crowd at the start of the show, Billie Eilish has it figured out. As the lights dimmed at Schuba’s Tavern, all heads turned in anticipation to the door where the fifteen year old would enter. After 30 seconds of silence, the theme song from the hit NBC show, The Office, blasted through the speakers as Eilish took the stage.

Eilish kicked the night off with a crowd favorite, COPYCAT, and not a word of the song was left unsung by the audience. Eilish let us know multiple songs later that the night prior, she had unfortunately lost her voice, only one week into her tour. However, this information didn’t diminish the audience’s, nor Eilish’s, spirits. This gave further reason for her devoted fans to sing each word with gusto, especially the higher notes.

Eilish provided an extremely fun and relaxed atmosphere, constantly engaging to her fans, even answering questions shouted to her in the silence between songs. At one point, Billie introduced her brother, Finneas, who sings backup vocals for Billie as well as plays guitar and piano. Finneas came to the front while Billie had a water break, and sang a song of his own. The energetic, joyous chemistry on stage between the pair was nothing but  contagious, watching Finneas copy Billie’s choreography garnered laughs from the crowd, as well as a dance break during the penultimate number.

While Eilish’s set clocked in at only 45 minutes with one Drake cover thrown in, it was a memorable show nonetheless. Eilish’s talent shines throughout each one of her numbers, and her stage presence speaks for itself.