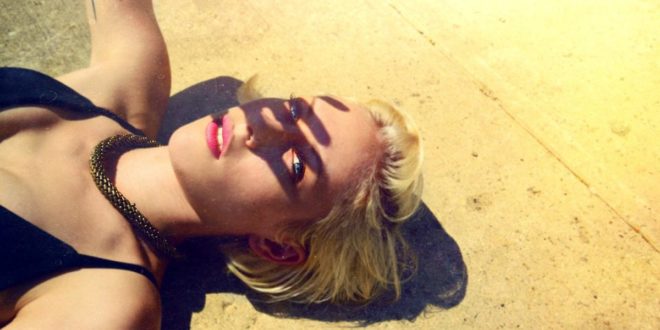 Out on July 28th, Katie Costello’s EP New World is a most impressive pop record. While most top 40 songstresses sing about romantic relationships, crushes, and breakups, Costello turns her attention to real world matters and it is akin to drinking a refreshing glass of lemonade on a sweltering hot day. It’s just what you need and it feels good.

The title track “New World,” is a sunny pop infused tune but the message while bright and cheery also acknowledges that the world can be a hard place to live in. Ultimately though, Costello sings of a brighter future, and a better world happily crooning that she is going to create a new world for her friends to live in which they can be free to love. The whole album has a Sabrina Carpenter vibe to it, and Costello’s voice is similar to Carpenter but there is plenty of room for both artists in this musical landscape. Her positivity is a glowing beacon that will attract listeners who are tired of hearing the same scenarios being played out in radio hits time and time again. Costello isn’t the first person to sing about and address the state of the world and aim to make it more peaceful, but she does so with such conviction and ease that one can’t help but be moved by “New World” and believe that the best is yet to come. And with visual poetic lyrics such as “have you seen the moon lately her face is looking so sad?” It’s no wonder that Costello is setting herself up for stardom while making a difference at the same time.

“A Beautiful Mystery” has a slightly more alternative vibe, the opening riff sounds a bit like The Strokes hit song “Last Nite,” but it still has plenty of pop flavor to serve up. Costello sings about moving across the stars and from above she can see the world for what it is: a beautiful mystery. It’s charming and Costello’s voice is sharp and interesting but also gentle. These are the kind of songs that one will want to inhale every single word of because it’s all very magical and important. The chorus is catchy and proves yet again that Costello knows how to craft the perfect pop song but with more substantial content. It’s the type of song that will get stuck in your head immediately after hearing it and you will want to hit replay. But that is another one of Costello’s greatest assets as a singer, she knows just how to pull listeners in enough with her upbeat attitude that will make one want to spread her glorious messages to the rest of the world and share her music with them.

The EP closes with “Hearts on Fire,” which again boasts some of the best lyrics on the album such as “I watch the world going by on a movie screen.” Here she sings about wanting to be like an astronaut wanting to be weightless when she feels like she is stuck fighting gravity. It is the most conventional song on the album, and multiple readings of the song could be interpreted, but Costello uses her charm and sunny disposition once again, set behind a backdrop of the most colorful instrumentation on the album, to make the song soar into something more special. The chorus becomes an anthem of some sorts and one can almost hear this being sung along to by millions of fans in a stadium concert.

If you’re looking for new music that will genuinely make your heart feel full and happy check out New World when it is released.