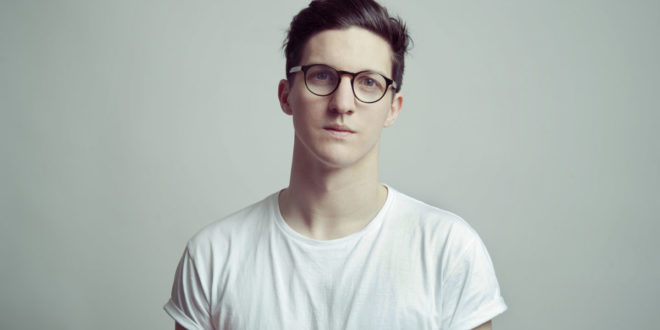 Liverpool, England singer-songwriter Dan Croll experienced honest-to-goodness success within a relatively short span of his music career. The release of his 2014 major label debut, Sweet Disarray, was followed by an appearance on Jimmy Kimmel and, despite variable reception, a still-respectable #12 spot on Billboard’s US Top Heatseekers Albums chart. While a fair amount of criticism addressed the album’s ‘patchy’ and otherwise not fully realized sequencing, its experimentation proved to wholly compensate. Now, his latest album, Emerging Adulthood, which is slated for release tomorrow, July 21, shows definite improvement in its execution of both factors.

Opening on “One of Us,” the grand presence of the song’s chorus in acapella form threw me off balance. It wasn’t the kind of move that felt like a low blow to the kidney, though. More so, I felt the satisfaction that a well-done preview melody influences when it reaches out to the listener. Once the additional instrumentation entered the scope, I was hooked. The post-punk edge emitted from the guitars felt equally complementary to the percussion, which accentuates every strum. Another element of note to this progression involved the tempo itself. With just a slight variation on the time signature, the groove switches from that of punk to nearly-militant. To an extent, that sense of command competently encompasses the song’s theme of being swept by something seemingly bigger than life itself. “Bad Boy” expounds of this theme, but in a different scenario. A good-natured albeit disenchanted girl aims to broaden her horizons by associating with an adventurous, been-there-done-that rebel. Where greater detail is expressed is in the song’s outcome. The girl is ultimately heartbroken, but has taken the experience in stride as an essential asset to her maturity. I appreciated how the hook factor of the melodies elevated those lyrical sentiments, and although this combination comes off somewhat streamlined, it benefits the album’s pace. “24” also marks a decent thematic transition, centering on the hardships of growing older, specifically, age 24. It is the tail end of one’s early 20s, when, as the context of the song suggests, the pressure sets in of aiming to be as ambitious as possible versus simply following a natural flow. There’s something about the songs structural contrasts that highlights those two mindsets: the rigidity of the synths atop the smooth, nimble bassline, and the bright, almost repetitive nature of the vocals over a constant percussive heartbeat. I thought “January” to be the track’s successor in a broad sense, the title signifying a pivotal time for the solidification of change. Various events that were once deemed milestones, such as having a first love or one’s own space, are now considered fragments of the past to be let go. However, “Sometimes When I’m Lonely” expresses the contrary. The subject of this song deems their change of scenery a means of running away, rather than legitimately moving forward. But in their lapse to pause and recollect, they’ve come to recognize the extent of their actions and feel a sense of guilt. As a result, the stylistic shift between songs, from serene to somber, works effectively in capping this first side.

On the second group of tracks, “Swim” kicks off in a way that feels as fresh as the start of the album—and that’s saying a lot. It provides just the right amount of space and build up to get the listener ready, while continuing to stay thematically intact. Its electronic drum feel, along with the aquatic effect emitted from the guitars, both go a long way to elevate the song’s context. The notion of water, in that regard, assumes two forms: a gentle means of support, or a daring force that progresses in both depth and challenge—one to face either with support or alone. “Educate” then serves as the song’s answer, playing like an assessment of thoughts. Once a courageous mindset is implemented, those hurdles once viewed as detrimental are figured out how to be worked around. Hence, the concept of learning from one’s own mistakes is implied in an analogous manner to that of the previous song. Both “Away From Today” and “Do You Have To” have connecting themes as well. Whereas the first song deals with feeling the truest extent of one’s support in the journey toward independence, the other deals directly with the strife brought on by heartbreak and an ultimate parting of ways. It’s a sensible transition in the way that a thick heart can be easily trampled by a small disturbance, regardless of its toughening overtime. The final track, “Tokyo,” thereby highlights a more intense challenge: sitting still and remaining uncredited for the other’s success as they push onward, or attempting to follow the other amid the fear of slowing them down. Nonetheless, a gleam of confidence and wide-eyed wonder persists through the instrumentation, with an upbeat synth jam that wraps the album nicely.

Overall, Emerging Adulthood feels like Sweet Disarray’s successor in every right. Each song plays like a succinctly-stated stage of emotional growth that increases in resonance as the album progresses. The production values are lush and even more tightly refined, while the album feels better structured and thematically cohesive. If Dan could achieve solid success with a burgeoning major label debut, I have yet to witness the impact he could make with this vastly improved follow-up.

I come from a family who is passionate about all things music. I learned to sing at an early age, and by 13, had my very own Fender Strat guitar. I tried my hardest at learning all that I could. Because I was born with cerebral palsy, I had to teach myself an adaptive playing style. I learned to write and record my own music, despite these difficulties. In college, I started making great use of my writing abilities by reviewing music, as well as copy editing. I guess it's best to stick with what you know, while welcoming a fair challenge at the same time.
Previous The Fell Release Official Music Video For First Single “Footprints”
Next Interview with Vincent Price of BODY COUNT at Chicago Open Air 2017