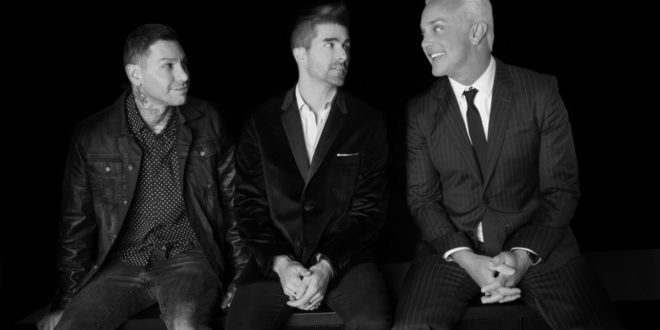 Los-Angeles based ska punk band GOLDFINGER have premiered their newest single “Tijuana Sunrise,”  off of their long-awaited album The Knife on Billboard today. The song is the latest cut made available from The Knife, which will be released on July 21 through Rise Records.

Featuring a reggae-esque rhythm with catchy lyrics about being young and engaging in youthful shenanigans, “Tijuana Sunrise” is not only perfect for BBQ’s across the country, but also highlights a summery pop accent on their new record.

Talking about the song, frontman John Feldmann says “Tijuana Sunrise is a song about my youth… growing up in San Diego. I survived those days in Mexico by seconds and inches… one of my roommates was kidnapped by a man named El Diablo, and I wrote this song about my experiences back then.”

Goldfinger’s resurgence on The Knife is not a rehearsal of past glory; it is a revolution. This is greatly echoed in the band’s revamped lineup, featuring MXPX’s Mike Herrera on bass and Story of the Year’s Phil Sneed on guitar (both doing backup vocals as well). Blink-182’s Travis Barker plays drums on the album, making the album a fitting collection from different corners of the punk world and further showcasing Feldmann’s ability to draw from and synthesize influences into a cohesive, character-infused collection of talent and art.

Goldfinger continues to build on a highly regarded legacy where they have been considered one of the forerunners and most well-known bands of the Third-Wave ska/punk movement of the late 90s. Their 1996 self-titled debut went gold and was named one of Alternative Press‘ “Ten Albums That Defined 1996” in 2006. AllMusic said, “no one had more success with this new sound than Goldfinger on their self-titled debut”, calling it “irresistibly catchy, creative, and hopelessly endearing.” 1997’s Hang-Ups reached #85 on the Billboard 200, and the single “Superman” was prominently featured on the soundtrack for the generation-defining Tony Hawk Pro Skater videogame. After six full-length albums and over a decade of touring, Goldfinger amassed an international fan base drawn to the band’s penchant for big choruses, attitude, and creativity of seamlessly fusing punk rock, ska, skate punk, and various other genres.

Goldfinger is playing select dates on Warped Tour this summer, along with a handful of additional US dates in September. All dates are posted below. You can pre-order The Knife now on iTunes and MerchNow.