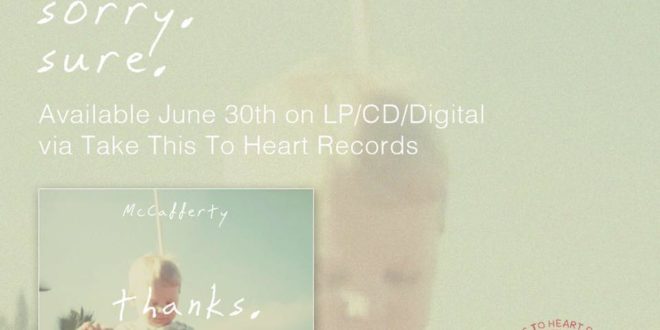 Album Review. McCafferty: Thanks, Sorry, Sure.

McCafferty’s EP Thanks.Sorry. Sure. is out on June 30th and it is a mixture of punk rock and heavy rock that definitely shows the band carving out a name for itself.

“Cut Out the Pieces,” starts out with sparse instrumentation and then grows into a well rounded full punk pop sound. The actual lyrics to the tune are heavily muddled at times which is a bit of a shame because one can tell that each word sung is important to McCafferty and it is important to hear the story that the track is telling. However there is such a strong energy to the song, amped up by killer vocals and spoken word samples, that it is easy to forgive what one cannot decipher. Putting the bits and pieces of certain lyrics together one is able to get a general feel for the tune and maybe that is all that one really needs. All in all it’s one of the shining spots on the album.

The best song on the EP is “Outlaw” with its punchy vocal delivery and spitfire lyrics such as “you got your own way so have your own way.” A dysfunctional family is the center of the track with our lead singer outright claiming that he is the outlaw who has come from a broken home and in turn has broken bones. It’s a snapshot that is honest but never comes across as whining. Instead with spunk and plenty of attitude McCafferty deliver a tune to that is strong, short, and to the point but will leave a lasting impression on listeners. Cussing his way through the tune, only makes the song more emotional as our singer leaves his heart open and wounded for all of the world to see. Quite a brave move, “Outlaw” is brazen but never brash just to be brash. If there’s one song to listen to on the record “Outlaw” is it.

Meanwhile toward the end of the EP is “Dead Bird II” in which an almost monotone vocal performance is part of the songs charm. This is a bit on the harder rock side with electric guitars blazing at full blast. By the middle of the song it all builds up to a musical explosion which bursts into full on screaming of lyrics and while this may not suit everyone’s taste in music, for those that do like a rougher edge on their songs, they will drink up “Dead Bird II.” There is a ton of emotion on the track which is felt throughout and with lyrics such as “new years, another night alone” and more spoken word samples, McCafferty solidify themselves as artists worth watching.

Other points on the EP aren’t as strong, but when McCafferty hit their stride they can’t be beat.

retro music enthusiast. Dreamer. Kind of odd. Writer
@twitter.com/for_no_one1014
Previous Sean Taylor the Best Hip Hop Artist from Germany with a New Single Get Rich
Next Fairy Bones Release New Single “No One Can Suffer Like I Can”