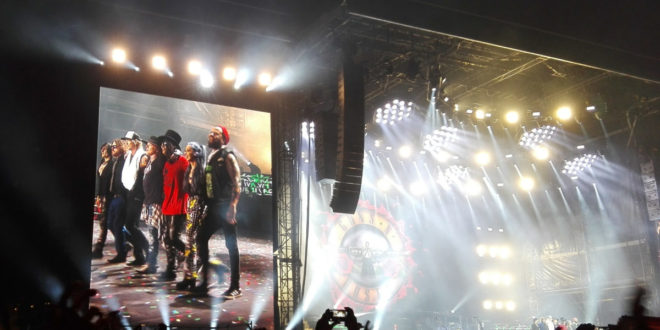 A sea of people in band t-shirts approached Passeio Maritimo de Algés on Friday, June 2nd for a sold out show celebrating the reunion of one of the biggest rock n’ roll bands on the planet. From old school fans to youngsters who may not have even been alive the last time Guns n’ Roses visited Portugal with its original line up, all lined up with palpable excitement for what everyone knew would be an incredible night.

Despite a running joke regarding the band’s potential infamous tardiness, the show started on time and on cue with a beautiful sunset as a backdrop. No sooner did the GNR logo creep up the back of the stage, a flurry of Portuguese flags waved excitedly with matching cheers of anticipation.

It is when “Welcome to the Jungle” starts that the audience goes crazy. Everyone knows the lyrics and joins Axl Rose in a perfect choir while his voice stands by itself (which personally surprises me).

What a great feeling it is to watch the band reunited on stage. Regardless the fact Slash and Axl being the main core, Richard Fortus and Duff McKagan hold their own with a great performance.

Slash absolutely nails every song slaying the guitar. With detailed plans of his hands in the big screen, it was impossible not to be overwhelmed by his performance. That is why this man is an absolute living legend.

The show had just started. After only 3 songs you can surely say Guns and Roses are really back.

From “Double Talkin Jive”, “You Could Be Mine” or “Civil War” to their classic cover of “Live and Let Die,” the band gave an amazing performance supported by a great set design. GNR joined a wealth of artists honoring the late Chris Cornell with an emotional cover of Soundgarden’s “Black Hole Sun.”

Right after, the love theme from the movie Godfather brings Slash to a guitar solo that left the audience breathless. Emotional moments.

The hit parade was just getting started. “Sweet Child of Mine”, “Out Ta Get Me” followed by a beautiful guitar duet of Pink Floyd’s “Wish You Were Here” by Slash and Fortus at the upper stage.

For most of the people there who grew up with this band, it was a nostalgic moment when Axl Rose sat at the piano for an unblemished rendition of “November Rain”.

“Knock on Heaven’s Door” performed with a reggae touch sounded amazing and even though there were more than 20 songs played that night, no one was quite ready to leave.

After a very short break, the band comes to the encore with 4 more songs, starting with “Patience” and finishing in apotheosis with “Paradise City” accompanied with the trademark GNR fireworks display and confetti.  Judging from immediate feedback of nearby fans calling the show “unbelievably good,” many dreams came true that night. Nearly 3 hours of an amazing rock show, with a band that put up a great performance supported by an insane crowd (as Axl Rose stated).

Still faithful to his eccentricity, Axl Rose changed clothes and hats a lot during the show and it is hard to believe he still has so much energy or how remarkably his unique voice still stands out.

If we think about the inspiring life changes held by either Slash or Duff McKagan it is sure to say that the band’s old lifestyle on the fast lane with sex, drugs and rock n’ roll is definitely not the road to follow.

Guns n’ Roses have matured despite the numerous bumpy roads along the way, but they are certainly alive and kicking.

You Know My Name (Chris Cornell song)  – on tape