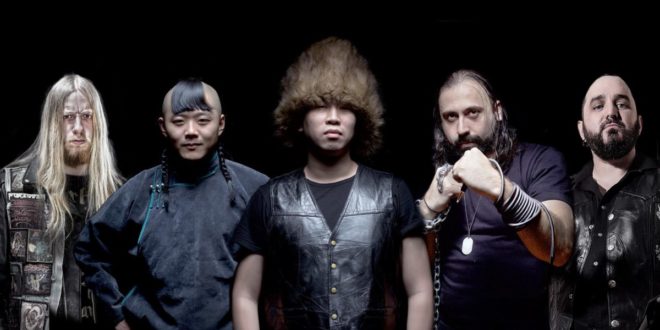 Tengger Cavalry has gained quite a presence on New York City grounds, receiving coverage from music outlets Billboard, Metal Hammer, and MTV to news-based CNN, New York Times, and Wall Street Journal. The quintet is set to embark on a June/July tour with Felix Martin, Malphas, Sicocis, and Helsott. Fronted by Beijing, China native Nature Gangganbaigal, Tengger Cavalry’s sound draws equally from traditional Mongolian folk melodies as it does from its heavy metal foundation. However, their recent efforts—namely the covers comp Cavalry from Hell and the to-be-released Die on My Ride (June 2)—evolve toward broader genre spectrums, such as alternative and pop rock.

I caught up with Nature to discuss the band’s roots, as well as the progression of their sound as a fully-fledged collective. Ultimately, they simply aim to explore as many musical avenues as possible to the greatest extent, without any hesitance or oversight.

ME: You started Tengger Cavalry in Beijing back in 2010, and have since been based in New York City. What can you assess about both cities in terms of what they offer musicians?

Nature: For some perspective, Beijing is very similar to New York City, which is like my base now (laughs)! Both cities have big-ass buildings, tons of people, and diverse groups of minorities. When you want to play folk music and add metal to it, those kinds of cities are good for that. You can find all kinds of artists, but you’ll be able to reach the equipment that you need to generate and record those sounds, too. Also, those kinds of cities have big venues and promoters. [In Beijing], their industry exists, so I think that somehow nurtures the scene, and gives bands potential to grow over there.

ME: Upon relocating to New York City, you made the best of it by earning a Master’s Degree in film music composition. I’d imagine that goal went hand-in-hand with your music career?

Nature: Well, I decided to pursue a music career in America a few years ago. I applied for film music at New York University, since they have a great [program] there, and I convinced myself that it might be the springboard toward continuing my career on a different level. While I was in school, I learned a lot about traditional composition techniques, and that mindset really helps when I write songs for Tengger
Cavalry. In some ways, Tengger Cavalry is like a mini symphony band, because we have so many weird instruments and everything. So, it did help me as far as coming up with arrangements and that kind of stuff.

ME: Besides metal, a signature part of Tengger Cavalry’s sound has been your integration of traditional Mongolian elements, such as throat singing, and the Morin Khuur, or horsehead fiddle. Can you tell me a bit about how you learned to harness those elements, and their progression from album to album?

Nature: I was traditionally trained in the fiddle and throat singing by my Mongolian teacher back in Beijing. You know, there’s a community of Mongolian musicians there. I think that helped me a lot, because when you live in the city, you got nothing. There’s no root culture, and you’re disconnected from the nature of the land. Those arts that I’d received from that community gave me solid ground for my music because when I play it, it reminds me of horses on grasslands. It gets you away from what you’d suffered in the city. That’s something I feel blessed about—to learn that stuff and present it in Tengger Cavalry, in a heavy metal way. A totally brand new audience can appreciate those traditional arts, which is kind of cool (laughs)!

ME: Speaking of new audiences, you’d ended up selling out Carnegie Hall back in January. How was Carnegie Hall?

Nature: It was a really fun show! It was in two parts. For the first part, we dressed up in traditional Mongolian-style clothes, you know—very serious. We played oriental folk songs you could listen to and enjoy peacefully. The second part, we were drunk, and changed our clothes to heavy metal shirts. We’d jam our own songs, and the audience loved that contrast (laughs)!

ME: Recently, another stepping stone in the band’s career is signing with M-Theory Audio. How did that relationship come about?

Nature: Our manager, Dawn [Robinson], is an old friend of the label. She knew that it would be better in helping us grow our career, and I trust her, so I was like, “Alright, cool, let’s go for it!”

ME: Your new album with that label, Die on My Ride, is going to be released in June. What is it that resonates with you about the title track, as far as how it represents the album?

Nature: This album’s actually pretty different from our previous three releases. In the past, the albums had formulated stereotypes about Mongolian folk with heavy metal. That’s what I was aiming at, and I was happy. But now, I really want to present something more than that. I think we definitely incorporate a lot of different musical elements—more traditional heavy metal and western melodies; not just oriental. We’ll sometimes at crazy parts, like a cello solo. For the chorus, this is the first time we’ve had clean, poppy vocals. I really enjoy that, because the whole album is just like an adventure for our new musical direction.

ME: From what I can tell, there’s a lot more hooks, and it’s more alternative.

Nature: Yeah! I wouldn’t even call it folk metal anymore. I’d call it alternative metal with an oriental flavor, which is a more accurate way to describe this album especially.

ME: And you still keep your signature elements intact even with those changes.

Nature: Yeah, we try to keep the soul in it so that people won’t freak out and say “Oh no, now they’re an industrial band (laughs)!”

ME: This album also contrasts thematically especially in its focus on relatable subject matters, like racial discrimination, loss of identity, and fighting for freedom. What can you tell me about your personal experience with these issues?

Nature: That’s a very good question. Even though New York City’s diverse, I see a lot of people clashing. From what I’ve observed, and also what I feel and hear from my friends, it’s down to who you are. When you’re exposed in such a diverse community in both good and bad ways, they’ll expect you to behave a certain way. There’s a model of behavior for everybody—not just for me, you know? If you’re white, you’re supposed to do this; if you’re black, you’re supposed to do this. That really limits someone as an individual—as a human being. So, that’s a really big part of this album. I extended the idea from personal experience, as I’ve seen other people go through the same thing. People give others a hard time because they don’t know who they are anymore.

ME: From another perspective, you can have all the success in the world, but taking care of your mind is of prime importance.

Nature: Oh, that’s the hardest part, because humans are social animals (laughs)! Our instinct is to follow our hearts; that’s been in us since we were monkeys, you know? Everyone expects you to be a certain way, but you want to follow your dream. That’s why you’d write a good song about it.

ME: Another single you’ve released is “Ashley,” and in its press release, you address it from a humorous slant, how normally the band sings of horsemen galloping through battle and bloodshed, then suddenly it’s like, “Who’s this girl now?”

Nature: (Laughs)! I really wanted to include just one track that would screw with everyone’s mind, like, “What the hell are you doing?” But only one, because having a bunch changes the whole theme of the album. After so many heavy songs, it’s good to enjoy at least one with a radio friendly, pop feel. There’s nothing wrong with that.

ME: I noticed that its precursor of sorts is a covers album, Cavalry from Hell, which showcases a lot of popular songs, there’s “Master of Puppets” and “Symphony of Destruction,” but also “Sk8er Boi” and “Wonderwall” Clearly your drive isn’t simply metal—it’s music!

Nature: Right! For this covers album, of course the songs are from big metal bands like Rammstein, Metallica and Megadeth. But I think it’s interesting and also kind of funny to have an Avril Lavigne song, and Oasis. Me personally, I’ve always been into all kinds of stuff. Like Avril Lavigne, she has some really good songs with good production. I don’t mind learning from that. It’s fun to just experiment. You’ll get some hatred, and people will always have different opinions. But I think if I just keep repeating, that would be the biggest betrayal to my audience. Actually, I thought that people would dislike this album but they really liked it a lot! They were so surprised about the “Sk8er Boi” cover, like, “I really hated this song, but now, you made it sound so good!”

ME: With this album, as well as the one coming out, I get a sense that your aiming to showcase as many sides of the band, without hesitation or shame. That shows just how much you’ve grown, right?

Nature: Yeah, I mean, we only have one life to live. Who knows what we could have done? If I write a song to my audience, I’d want to be honest with them and not hold back. I think that’s the highest form of respect you can give. Be honest with them and just give them new ideas; don’t just do what they like and keep repeating.

Nature: We really appreciate all the support from around the world. I don’t think this band just belongs to me or us. It belongs to everyone who has supported us. A band won’t exist without support from the professionals, and the audience too, and we understand that. We’re grateful for all of it, especially from those who enjoy weird sounds (laughs)!

Pre-order Die on My Ride

I come from a family who is passionate about all things music. I learned to sing at an early age, and by 13, had my very own Fender Strat guitar. I tried my hardest at learning all that I could. Because I was born with cerebral palsy, I had to teach myself an adaptive playing style. I learned to write and record my own music, despite these difficulties. In college, I started making great use of my writing abilities by reviewing music, as well as copy editing. I guess it's best to stick with what you know, while welcoming a fair challenge at the same time.
Previous IT’S NOT DEAD 2, SoCal’s Biggest Punk Rock Festival Returns to Glen Helen Amphitheater Festival Grounds in San Bernardino, CA on Saturday, August 26, 2017
Next Doyle Wolfgang Von Frankenstein Releases Music Video for “Run For Your Life”