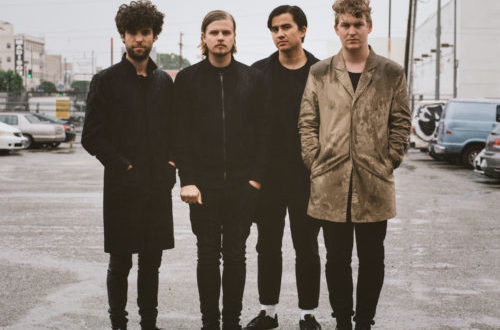 Klangstof to open for Flaming Lips in Oakland, CA May 10 – Interview with Koen Van de Wardt

Next Wednesday, Amsterdam alternative quartet Klangstof will join the Flaming Lips as part of a steady Californian tour date series. With their debut, Close Eyes to Exit, the band have already proven themselves as one of the most promising acts to emerge in the mid-to-late 2010s. Just two short years after forming, they would go on to receive such prestigious recognition, opportunity, and, among all things, major label distribution. I caught up with the band’s vocalist, Koen Van de Wardt to discuss his musical roots, the band’s well-earned rise to fame, as well as how Klangstof’s musical potential rings pertinent to fans.

ME: Let’s start with your beginnings. I understand that Norway was where you began developing your musicianship. Can you tell me a bit about how that place really influenced your progression?

Koen: I think it happened as soon as I moved from the Netherlands to Norway. Back in the Netherlands, I’d never thought of doing anything with music, just because there’s so much going on. When I moved to Norway I felt completely isolated. Then, I started getting into playing music only because I was really bored, and once I started, I just never stopped. That’s the good thing about Norway; you get bored, and that’s why it has such great musicians I guess (laughs).

ME: Your background is self-taught, not only with playing music, but recording as well. What approaches did you go by that kickstarted that hands-on mentality?

Koen: Every time I didn’t understand something in the process, I’d just end up googling it. But it has taken me a really long time to master everything. I started out writing and recording when I was 14, and [Close Eyes to Exit] was finished a year ago. So, it took me maybe seven, eight years to really get where I am now, and I didn’t need any real help or teaching, you know?

ME: What it comes down to is a bit of trial, error, and patience.

Koen: Definitely. If I’d listen back to how the album sounded four or five years ago, it sounded horrible! There have been a lot of errors, but I think I’m kind of a perfectionist. I would just never release something that doesn’t sound good, so I kept tweaking and tweaking it. Until a year ago, I could tell myself, “Now, I think it’s finished.”

ME: When you were in Amsterdam back in 2013, that also marked the birth of Klangstof. From what I gather, Klangstof was a one-man project that eventually evolved into a full band?

Koen: Yeah! I finished the record as soon as I’d moved back to Amsterdam, and it was one of all these songs I had lying around. I uploaded “Hostage” to SoundCloud, and then a week later, I got a call from David Dann of Mind of a Genius, who basically says, “I wanna make you the new Radiohead.” Then I said, “Alright (laughs)! Let’s try this out.” I’d never really planned on releasing anything, being a professional musician, or taking this very seriously; I just wanted to make some music. As soon as I’d signed the deal, I knew that I had to find a band and start playing live. But two years later, we’re a fully- formed band.

ME: Woah, all this was possible thanks to a label stumbling upon your music on SoundCloud?

Koen: Yup, and looking back, I know now that Mind of a Genius have ears for new and up-and-coming acts. They’re just good at finding stuff that the bigger labels don’t, so I think I was really lucky to get a call from David. From there, I was like, “Let’s try to become the biggest band in the world (laughs)!”

ME: When all this opportunity arose, you turned to the guys and were like, “We can really do this!”

Koen: Yeah, at first, this was just a hobby, and once that deal came, I was like, “Okay, this is what I want to do for the rest of my life.” You’ve got to work really hard at it, and I wanted to pursue that dream.

ME: You’ve made some massive progress, having played Coachella, wrapping up a British tour, earning an Edison award, and now, you’re opening for Flaming Lips in Oakland on the 10th. Doesn’t it almost feel surreal knowing you’d only formed Klangstof two years ago?

Koen: (Laughs), yeah, it’s sick! Sometimes I forget to think about it just because it’s been going so fast. I don’t have much time to pause and think about everything that’s happened. We’d [actually] only been playing live for not even a year, since July 2016, and then did all those things you’d mentioned. But I really like it, and hope we can keep going at this pace, because it’s amazing what’s happening now.

ME: What were the ways you translated your sound into live performances?

Koen: In general, it took us half a year before we took to the stage, just because I wanted to make sure it was perfect. The record has a lot of layers of synthesizers, and we could never perform it live with only four musicians. We had to scale down and really play with the dynamics on stage. But as soon as we’d started playing, it just felt right, and it seemed like the audience got our music straight away. No matter where we play, we feel the vibes are pretty good.

ME: With each country, you just learn to get better and better.

Koen: Yeah, and you definitely learn a lot. US audiences are more honest than in Europe. If you’re playing Coachella and someone doesn’t like your music, they’ll start booing at you, or start screaming if they love it. In Europe, they don’t do anything except maybe stand and drink beer. So, I like the US crowd because you immediately know what you’re getting.

ME: What is it that gives these songs an especially live dynamic as opposed to the album versions?

Koen: Back when we first started, it was heavily sampled and using a lot of backing tracks, so it ended up sounding too much like the record. There’s kind of a robotic feel when people rely on click tracks. So, we thought of just working to get every sound possible out of our instruments. We sometimes run around and have four different elements in one song. But I really think that’s what live music should be. You should see people just playing music, not focusing too hard on trying to hit all the right notes at the right time. It’s that energetic because you see us work so hard on stage.

ME: Even when things may go wrong, it’s those imperfections that push you to make each show better than the last one.

Koen: Yeah, in fact, on the second week of Coachella, we had some mistakes and sounds that didn’t work. It gave the music a natural vibe, because the audience immediately senses that something’s happening on stage. Then as soon as you start jamming and improvising something raw, you can get that extra attention from the crowd.

ME: From a personal standpoint, given that your material is being distributed by Warner Bros, what is it about your music, stylistically and thematically, that has been resonating deeply with the audience you have now?

Koen: I think what a lot of fans like about the record is that it’s just very honest, you know? When I wrote it, I wasn’t trying to come up with a hit single or becoming famous. I just wanted to write the best music I could without thinking about anything else. And I really get the feeling that a lot of people actually understand that too. In pop music these days, you have this emotionless thing going on because those artists just want to have a hit, instead of making something substantial. My main point has always been to just do what I want, not what people expect, and I think they can appreciate that.

ME: Whether you’re talking rock or pop music, there seems to be a lack of adventure, mainly because the focus is on polished production, rather than content. But you push for variety, and that’s what I glean from your music.

Koen: That’s correct, and that’s also why I never wanted another producer for this first record. I wanted to do it all myself, and not get any interference or outside opinion. It’s true though. You have this similar sounding pop production they put over your songs, and I just really didn’t need that.

ME: Based on what you have out now, are you planning to expound on its concept with the next record?

Koen: We actually have a few songs for the next record finished already. It’s definitely different, because now I want to get a creative vibe going with the four of us. That really works well. We’ve rented a cabin in Norway, and we’ll just stay there together for a month. It’s better to be making a more band-oriented sound rather than sounding like a solo project.

I come from a family who is passionate about all things music. I learned to sing at an early age, and by 13, had my very own Fender Strat guitar. I tried my hardest at learning all that I could. Because I was born with cerebral palsy, I had to teach myself an adaptive playing style. I learned to write and record my own music, despite these difficulties. In college, I started making great use of my writing abilities by reviewing music, as well as copy editing. I guess it's best to stick with what you know, while welcoming a fair challenge at the same time.
Previous Gallery & Review: Blues Traveler at Genesee Theatre, 4.27.2017 – Waukegan, IL.
Next September Mourning Releases New Comic Book