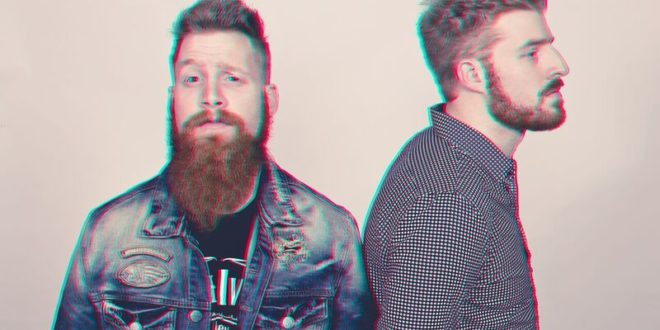 The duo The Ivins album Code Duello will be released on April 28th and the two deliver with music that is cohesive and sits right in The Ivins wheelhouse. Though there are some drawbacks to that approach it’s important to recognize that the pair know what works for them and are playing that to their full advantage. There is still plenty of time to work outside the box and experiment in future albums.

“Stockholm Syndrome” is pure alternative rock and is packaged in under three minutes which shows that The Ivins know how to manage their time and favor quality over quantity. The instrumentation is dark but also lively, getting the musical blood pumping.The song speeds by but is paced with the touch of a genius and though the lyrics are a bit muddled, the heart racing chorus and lead singer Jim Ivin’s passionate vocals dripping with intensity and emotion make up for what the tune lacks. There’s a great instrumental solo which is always appreciated and the song on a whole will leave an impression on listeners. As Jim Ivin sings “I won’t be your Stockholm Syndrome” one can’t help but nod along and feel everything he is portraying and that alone is the key to creating a memorable song.

Elsewhere on the LP “Masquerade” is one of the most mainstream sounding track on the record but it still retains a slight edge. It’s a midtempo tune with great lyrics like “if love is blind then I’m wasting my time.” Jim Ivin’s vocals are pitch perfect, especially on the chorus, in which he draws out some notes, using every ounce of emotion he has in him to make others feel what he is feeling. Once again this is a pretty dark song, but the chorus is so infectious and peppy that for a few seconds one can almost forget what the song is about. Almost. The balance between the dark and the light and the contrast between the sorrowful lyrics and the more upbeat pace show that The Ivins are skilled songwriters mastering every beat of their music. It’s little surprise that this is the best track on the entire album, Jim Ivin delivering a tune that if released as a single could be a hit today. If there’s one song that one needs to put on repeat this is it.

“Tell Me” comes near the end of the LP and is a pretty lengthy song but it never drags. The verses are quiet with prolific lyrics such as “All I could see was what I haven’t done.” It’s relatable and by the time the chorus crashes, much like the airplane in the song, listeners will be able to forge a deep connection with the track. Metaphorically the duo score tons of songwriting points here, but it never becomes too much. Jim Ivin once again nails his vocals at time almost screaming with painful memories which matches the screeching electric guitar that is featured prominently throughout the song. As he sings “we’re going down” one can’t help but feel along with The Ivins. Honest, never backing away from hard subject matter, The Ivins prove song after song that they are willing to go places musically that serve them and their fans well.
Overall the album is a success so be sure to pick up a copy when it comes out.