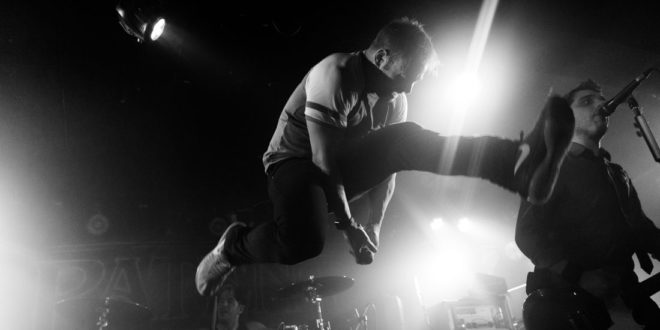 Running late for supports always sucks but when they are as good as Sweet Little Machine and Eternal Boy you would make sure you don’t miss them. It was a brilliant array of fun pop-punk and jumpy tunes. I really just felt such a good vibe as soon as I was in the venue. There’s nothing more perfect than when a band take amazing support acts on tour, acts who really get the crowd going on a really interactive with them as well. Unfortunately due to our Interview with Joe from Patent Pending we missed part of Sweet Little Machine’s set however, I really really enjoyed what I seen! The fact that they were so funny and made that contact with the audience even asking if there was anyone who had an ex boyfriend who was a dick and even dedicated one of their songs to the girls ex. From Sweet Little machine to eternal boys the pop Punk vibe didn’t stop eternal boys brought the most amazing energy to the stage for a three piece band they gave all they could get. I found myself non stop smiling through both sets with just the sheer excitement, fun and laughter the both bands brought to the stage. Patent Pending made such a good choice when it came to these bands, they were the perfect openers for the incredible show that lay ahead.

I knew a Patent Pending show was incredible but I didn’t prepare myself for what was about to come next. Before going in the crowd we did have a quick look at the merch table and we did see a range of “Stranger Things” merch, that left absolutely no room in my mind that all the intro was going to be the theme song from “Stranger Things” and I wasn’t wrong. Launching into the first song straight away you could tell the band were already having the time of their lives they just fed off the positive vibe and energy that support the bands had made the audience feel and within the first song Joe had already thrown himself in the crowd to crowdsurf. I have been to an awful lot of shows at King Tuts but I have never been to one quite like this, nothing as sweaty and fun and as absolutely crazy as a Patent Pending show. When we did speak to Joe before the show he did tell us that the show was an excuse for people just to go crazy and to have fun and enjoy themselves and rate from the offset it was told him that the crowd was having so much fun. The setlist for the show was a Patent Pending fan’s dream. It ranged from older songs to brand new songs and even a cheeky cover which we will speak about more later but for now it was time for the crowd to get the hooks up in the air for “The Whiskey, The Liar, The Theif!”

Something that the lead singer of most bands do now is jumping down off the stage and on to the front row barrier but its usually reserved for the last song and allows fans to sing into the microphone and just feel so close to the artist performing. For Patent Pending however, this is pretty much the whole show. Joe spends most of his time on that barrier, interacting with fans which is such a beautiful thing to see because the night of the concert is a night we can just go and you can forget about things. Music is so powerful and seeing fans have the amazing 1 on 1 moments even if it is just one throughout the whole show, whether it’s making eye contact with them or it’s singing into the microphone it’s truly beautiful.

Now, a standard tradition of any Glasgow show is the infamous “here we, here we, here we fucking go” chant delivered from a rowdy crowd as the lights go out when a show starts – every time – seriously. Patent Pending loved this chant so much, they incorporated to the start of their songs – Started In My Head. They had a friend come up on stage and film the full song with the house lights on to see how crazy the Glasgow crowd was! Like I mentioned nowadays it is quite common for lead singers, guitarist​ etc of bands to relate to their fans will there on stage and they talk about their problems and how the grow and it helps them to write music but when you take on a particular cities chant, something that’s personal to them, to support one of your songs it is something truly special and you can tell that Glasgow is obviously a city that means a lot to the band and it’s not just them a lot of other bands think exactly the same because when Glasgow goes they go hard.

It’s really easy to talk about a bands performance, about how their instruments sound and about how fun they are but it’s rare to be able to speak about how much a speech that the band makes makes a large impact on you personally. Before they’re song “One Less Heart to Break” Joe made a beautiful a speech about fitting in and about being yourself. Seen in the interview introduction. Joe Spoke about not letting anyone else dictate what you do with your life and the speech really did speak to me. He let myself and everyone else in the crowd know that they were in a safe place that they were accepted for being who they are and for the love of music and that no matter what was going on in their life around them, they would have this one night to just rock out and forget about everything.

Now for those of you that don’t know yet, only a few days ago the band announced a new album called Other People’s Greatest Hits and features a range of cover songs and we were lucky enough to hear the incredible version of The Spice Girls – Spice Up Your Life, currently its the only single they released from the album and it sounds great but just wait till you hear it live. Mind. Blown.The rest of the night was a blessing, not that I expected any different, there was sort of synchronised dancing, photos shoots as stuck-up douchebag rock band and of course one of the highlights of a Patent Pending is “Hey Mario” because guarantee at any one of their shows there is two kids dressed up as Mario and Luigi and sure enough a couple up the back stayed true to the tradition.

There are so many things I could say about this band and this review could go on forever and ever with just me gushing about their incredible performance and how much I didn’t want it to end but unfortunately it did come to an end after a wonderful encore of “Brighter” and “Douchebag” and honestly I’ve never had more fun. The whole night kept a warm and excited smile on my face and even now. I’m smiling thinking about doing it all over again next tour.