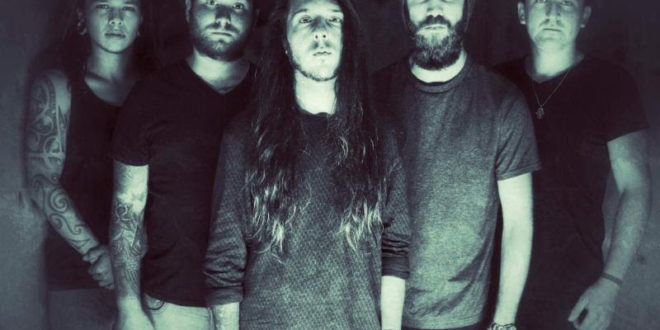 For their debut LP, The Cardinal, hard rock quintet Versus have constructed an ambitious project for the metalcore genre. Having released their first EP, The Black, last year, Versus now offer a more cohesive creation that possesses the traits to establish them as a prospective metal act.

The album opener, “Cardinal,” has a soothing piano introduction that will lure listeners in before bursting into a jolt of high powered metalcore. Joe Taylor and Josh Kendrick do a fantastic job of transitioning back and forth between their respective screamed and clean vocals. Taylor’s gruff vocals impressively build up to Kendrick’s clearer singing for the chorus. This is all backed up by Brandon Boylan and Anthony Zaragoza’s tight, thudding rhythm section. The riffs from Kendrick and fellow guitarist Mack Newman aren’t overly complicated, though they remain catchy and add a good amount of life to the track. Track two, “No Safety,” utilizes the same slick instrumentals as showcased on the previous song, and the shifting between screamed and clean singing is pretty reminiscent of acts like Of Mice & Men. This is the lead single from the album and it’s a justifiable choice because it’s a good summary of how the band presents themselves. The arrangements are well put together and all band members show clear passion for the music they’re performing. The third track, “Stone Heart,” is quite similar to the work of Bring Me the Horizon, specifically their 2013 release Sempiternal thanks to the sinister, brooding aesthetic that it carries. These aspects also draw comparisons to the band From Inside and their EP The New Era, who were reviewed on the site no too long ago, so fans of them will likely enjoy Versus as well.

Track four, “The Looking Glass,” is one of the most accessible tracks on The Cardinal thanks to its emphasis on smoother vocals. The instrumentation remains heavy though it’s a track that can likely capture the ears of listeners who aren’t straightforward metalcore fans. The track is inviting in a radio-friendly way, though it’s heavy enough so that it doesn’t feel out of place on the LP. It offers somewhat of a breather from the rambunctious metal presented thus far, though it doesn’t feel too restrained due to the lighter production.  The sixth track, “Empty,” is probably the most unique moment on the entire album due to its primarily piano instrumentals. This soft instrumentation is a sharp contrast when paired with the harsh vocals present all throughout the project thus far. That being said, it’s a nice, different note that’s placed in the middle of this mostly heavy listen. “Empty” could easily be compared to the quieter work of The Devil Wear Prada and it proves that Versus can offer a wider array of musical abilities other than the standard structures of metalcore. Track ten, “Poly” is one of the heaviest moments on the entire project and perfectly shows just how relentless Versus can be with their sound. The rhythm section is scattered, though still compactly played which gives the track a chaotic feel. Taylor’s voice practically bounces off the walls with enthusiasm when put in the middle of a hectic environment such as this one. This track ultimately shows that Versus have the ability to go even heavier with their style if they choose to, which offers more possibilities regarding the capability of their future sound.

As a whole, The Cardinal remains an impressive yet relatively safe project which makes sense for a band’s full-length debut. The album features various common characteristics within the general scope of metalcore, such as the inclusion of soft piano intros, the occasional use of sirens, and fairly typical lyrics that revolve around personal affairs. Tracks like “Distant” and “Zig Zag” follow the pretty standard metalcore formula and that might make for an overtly familiar listen. For fans of the modern flavor of metalcore which makes heavy use of these elements, then this certainly won’t be a negative point for those listeners. Mainly, this critique is something to keep in mind if any listeners go into the album expecting an overly experimental style of metal.

Despite the occasional use of genre tropes, The Cardinal still stands tall as a solid start for Versus. The band isn’t breaking down any barriers around the metal scene just yet, though they definitely show the skill and musicianship to hold their own in the populated genre. In order to further make a name for themselves, Versus should expand on their glimpses of experimentation shown throughout the album so that they can establish their own distinguished sound. If Versus can successfully pull that off, then their popularity will only grow from here.

Cain Miller is an aspiring writer who hopes to work his way up and gain notoriety for his material. Having written about film, television, music, and sports, Cain is always looking to gain as much experience as he can and continue to improve his writing abilities.
@cainemiller
Previous Album Review: Black Map – In Droves
Next Album Review. Inside Out: December Rose