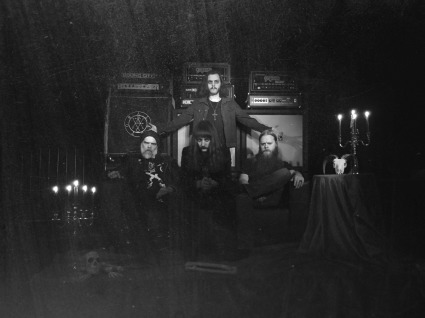 If informative, story-driven EPKs have become the primary method for garnering traction, then let Swedish doom connoisseurs Alastor defy that practice. Little is disclosed about the quartet. “H” and “J” comprise the guitar work, while singer/bassist “R” and drummer “S” keep the back beat. To top it off, Alastor’s mere three-word selling point of sorts―‘Die in fire.’―doesn’t necessarily seem the most inviting. But in fairness, secrecy drives curiosity after all.

Thus, despite the band’s apparently enigmatic promotion, their debut EP, Black Magic, compensates for that factor in the widest sense. The spectrum of influences that the band is predominantly doom, although classic and alternative metal do arise in spurts as part of that blend. R’s enigmatic vocal work exhibits decent range, and together, these elements present an intriguing, not to mention invigorating listening experience.

On the opener, “Enemy”, sprawling feedback and fuzz comprise the bulk of the atmosphere. There’s a subtle change during the initial chord sequence, although the drive is consistent—a combinative force of Black Sabbath pacing with Pentagram-infused rawness. I honestly didn’t know what to expect before the vocals came into play, but in short, they transition quite well within the instrumentation. The thematic sensibility of R’s Ozzy-like tonality becomes evident in much the same way. That is, his dreading not of a physical entity, something protracted progress and living a generally bleak reality. As the song begins to unravel, I appreciate the implementation of its two distinct solos, the first outwardly powerful, yet straightforward in its presence and the other, more loose and tinged in psychedelic elements. Clocking in at over 14 minutes, the song is simply the beginning in how the concepts clarity is eventually reached.

“Nothing to Fear” continues the momentum in this EP. It serves as the bridging track, half the length of the first, but equally meriting nonetheless. Further, then more straightforward nature of the instrumentation feels rightfully implemented. When done so from a thematic context, the general vibe seems to emanate a transcendental state of being—conquering, as well as rising above, life’s many incidental trappings. Following the main phase is a prominent wah-wah-infused solo, which bolsters the extent of their sound substantially. The sporadic feedback from the breakdown is another indication that Alastor maintains an earthy, underground stance. From the latter portion, onward, there’s nothing but sheer Sabbath-tinged blues brutality.

Finally, the EP ends with the titular “Black Magic,” its representative debut single. Much like the first track, the length reverts to an epic 14-minute length. R’s vocals also contain increased coherence, so as to let the band’s other signature components resonate by large. His additional harmonies prove to broaden their musical spectrum, especially when enveloped in reverb. The subject matter, however, is of contrast, more so by its fantastical allusions to witchcraft and Satanism. This way, the poignancy isn’t derived from deterring circumstances influencing temerity, but a simple, clever send up to what the darker side of metal represents.

Overall, Black Magic is a bold entry in metal’s predominantly ‘modern nostalgia’ territory. Beyond its familiar surface-based influences, the EP succeeds in offering a fresh, involved presentation, giving substantial meaning to pertinent human themes. Come its release in March, Alastor’s stature in even the general heavy music realm will surely be felt.

Listen to the “Black Magic” single

I come from a family who is passionate about all things music. I learned to sing at an early age, and by 13, had my very own Fender Strat guitar. I tried my hardest at learning all that I could. Because I was born with cerebral palsy, I had to teach myself an adaptive playing style. I learned to write and record my own music, despite these difficulties. In college, I started making great use of my writing abilities by reviewing music, as well as copy editing. I guess it's best to stick with what you know, while welcoming a fair challenge at the same time.
Previous Oliver Laughton – Solo Artist – ‘Silver Shoe’ – (Original)
Next Gallery: Ariana Grande at SNHU Arena, Manchester, NH 2/19/17