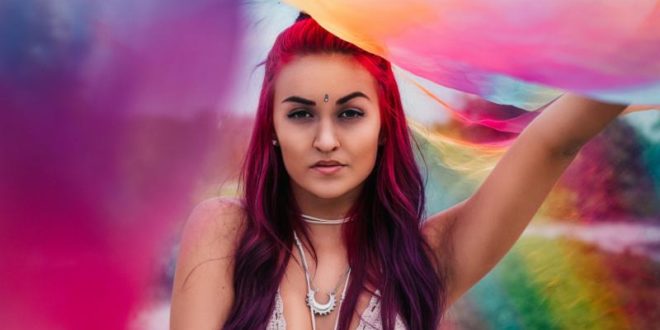 Pop/R&B singer, Ilana Armida always wanted to entertain and perform. She gravitated to music and theater at an early age and took her talents with her to college where she enrolled in Florida Atlantic University’s Commercial Music Business program. During her tenure at FAU, Armida took part in their student run record label Hoot/Wisdom Recordings where she learned the ins and outs of perfecting her craft. In 2013, Armida unleashed a short EP titled Used Up, and is thrilled to be back with her follow up, Iridescent Flower Child which is to be released on January 13, 2017 through her own record label, Eastpark Entertainment.

The 7-track EP is the outward expression of who she is as an artist and showcases her unique mix of energetic R&B melodies with catchy, soulful pop vocals, with a hint of funk and hip-hop throughout. Today, Armida is thrilled to partner with PASTE to unleash, “Sweet Freedom,” a song about putting your foot down and deciding to live life for you and no one else.

In addition to “Sweet Freedom”, the EP consists of already released tracks including the pop-dance tune “Pretend,” and “Still Down For You” which is soulful ballad that incorporates harmonized vocals over syncopated piano chords and dynamic percussion. Armida expands on the overall EP theme by stating:

“The word Iridescent signifies when something appears to change color when looked at from different angles. This concept alludes to my multiple dimensions and ideas that I communicate through the EP. Flower represents growth both as an artists but also as a person and a woman coming into my own. Child us used to symbolize two things; one is keeping things playful and not taking everything so seriously but also remembering my big dream that I had as a little girl and staying true to who I am.”

The EP was recorded in Bradenton, FL at the EastPark Entertainment Studio where Armida worked with producer Josh Holiday and mixing engineer Scott Orsini “Artichoke.” While creating the EP, Armida connected with former Florida Atlantic University alumni and friends Lee Ackred, Mylon Shamble, John Frasca to co-write “Pretend.” In addition, Armida was delighted to incorporate Kristina Bryant and Jamarah Eason who provided additional harmonies on the track, along with bassist Alex Szotak and guitarist John Frasca.

Pre-order Iridescent Flower Child here. With every pre-order, fans will receive instant gratification tracks including “Pretend,” “Still Down For You” and Armida’s latest smash, “This Feeling” with a visualizer to accompany. Armida expands on the importance of “This Feeling” below:

“This Feeling” is the intro track to the Iridescent Flower Child EP, which is in essence the introduction to my story and existence in the music world. “This Feeling” was originally written in my home studio along with my friend Lee Ackred and later reproduced with Josh Holiday.  Lee was messing around in Logic and created a really sexy two track loop and I just got on the mic and started singing what came to me. I was recalling the feeling I felt when I stepped off stage from my first show. When I started my set there were maybe 30 people in the venue and when I finished there were about 100 people giving me a standing ovation. It was pure euphoria and as small as the show was I recall it as one of the best experiences I have ever had. Josh and I came back to the song a few years later to create the final product. The song is about the feeling of euphoria, feeling it for the first time, and trying desperately to bottle up the sensation and keep it forever. The video was shot by Ben Johnson Creative. I wanted the video to capture the feel of the entire EP, specifically the title.”

For more information head over to IlanaArmida.com