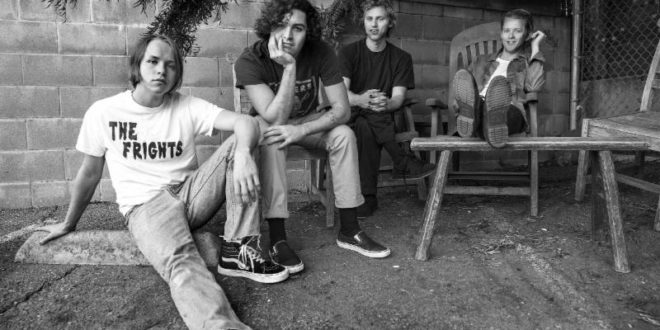 Bay Area quartet SWMRS today announced that they will support Grouplove on the next US leg of their Big Mess World Tour, which kicks off on January 30, 2017 in Knoxville, TN and wraps on February 17, 2017 in Lincoln, NE. Next March, the band will support All Time Low on a tour of the United Kingdom and Ireland. SWMRS is currently on the road in the US supporting FIDLAR on their Too Much Tour, which wraps on November 22, 2016 in Englewood, CO.  A complete list of upcoming live dates and ticket information can be found HERE.

Praised for “defining the sound of now” in Rolling Stone’s Best New Artists 2016 feature, SWMRS originally released Drive North in February via their own Uncool Records. Noisey announced the release and premiered the album’s lead single “Figuring It Out” praising the track as a “poppy foot-tapper filled with skate-gang vocals.” Nylon premiered the band’s video for the track, which was directed by fellow Bay Area artist Kreayshawn. Watch it HERE. SWMRS recently made their network television debut, performing the song on CBS’s The Late Late Show with James Corden.

Produced by FIDLAR frontman Zac Carper, Drive North also features the band’s debut single “Miley” which i-D Magazine premiered last fall, hailing the song as “the most punk tribute to Miley Cyrus ever.” The band’s DIY music video for the track can be seen HERE. Album opener, “Harry Dean” is an abridged version of a previously 17-minute epic the band originally recorded to soundtrack Saint Laurent Paris’s Spring/Summer 2016 presentation, earning them praise from fashion publications like WWD and Interview Magazine.