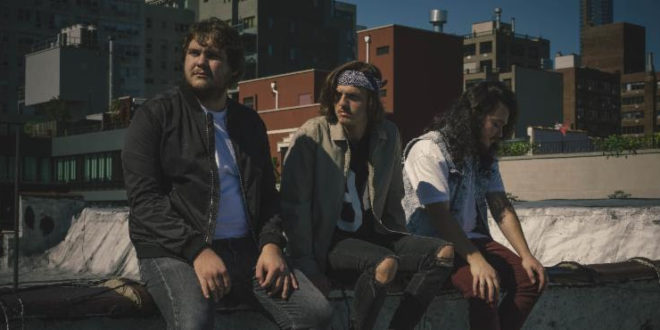 PHILADELPHIA, PA | NOVEMBER 2, 2016: Philadelphia’s rising indie alternative/rock band Civil Youthhave been making noise touring the country this summer, opening for bands like Twenty One Pilotsand AWOLNATION, and amazing fans with their energetic live performance and leaving them highly anxious for new music. Today, Civil Youth is thrilled to announce the official release date for their third full-length studio album, Conversations, which is to be released on May 19, 2017. The band shares this announcement with a captivating, dreamlike video teaser that can be viewed here, and the announcement of an official album release show at Theater of the Living Arts in Philadelphia, PA, on May 20th, 2017.Conversations is a genre-bending album self-produced by the band in their home studio, filled with rock, rap, and electronic elements similar to groups like Twenty One Pilots. Lead singer Michael Kepko explains the story and origin of Conversations:

“Lying in the back of our van one tour, the windows start to fog. Everyone is asleep besides me [Mike]. I sit up to realize there has been a word written in the fog against the windows. I squint, but everything is a blur. The next thing I realize there’s demons surrounding the van. Face to face we stare at each other. “What do you want?” Before an answer comes, the faces start to morph and I’m staring at myself. I scream to leave, but I only hear laughter. The word written in the fog is “Conversations.” The demons vanish and I’m sitting up, heavily breathing. I try to go back to sleep, but I’m lying awake as the sound of footsteps circle my ears. That night we begin writing a new record. An era that describes conversations we’ve had with our past & future selves. People we wish we were, or people we want to be. This highly-anticipated, 3rd full length album is an intense and driven fusion of rock, rap, & electronic music encompassed into one unique album. Recorded with the energy of the house we grew up in, the spirit of our past selves lives within the music. We proudly present, Conversations.” – Michael Kepko

Civil Youth is the independent, Alternative/Rock band based out of Philadelphia, PA. Since their first show in March 2015, Civil Youth has toured nationally and is currently venturing on their 8th U.S. tour. What started as an outlet for lead singer, Michael Kepko, to express his anxiety and depression while living in Boston, has evolved into a cultural movement backed by a community of thousands of supporters who identify with Civil Youth’s lyrics and music. Civil Youth inhabits each stage with light-up drum solos, crowd chanting, instrument swaps, and stage acrobatics. Between heavy guitar riffs, and poetic rapping, fans of all ages can find a way to connect with Civil Youth. Within a year, Civil Youth has surpassed the caliber of “local band”, and has established their name across the United States. After the release of their debut album, Disguised In Color, Civil Youth has gained airplay on 134 FM Radio stations, sync licensing with major networks including MTV, VH1, and E!, national press in Alternative Press Magazine, and has released their second full-length album, Who Rescued Who, as well as an acoustic album, titled, Ossein.

Civil Youth is set to release their highly anticipated third full-length album, Conversations, on May 19, 2017. Follow Civil Youth online for tour dates, new music, and more as they gear up for the release. Civil Youth will be playing an official album release show at Theatre of the Living Arts in Philadelphia, PA onMay 20, 2017, details and ticket information can be found here.