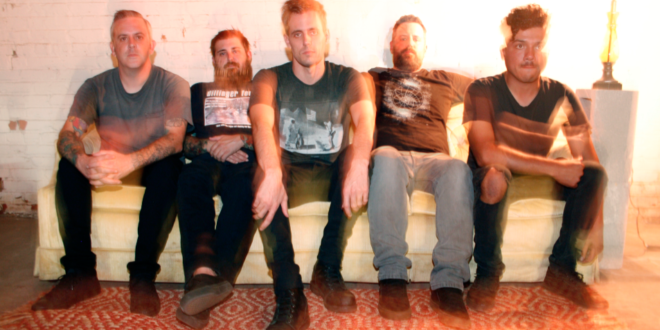 Interview with Jimmy Reeves of Sunndrug

Yesterday, Virginia Beach quintet Sunndrug released their debut album, Exit Wounds. Fans may recognize three of the band’s personnel—Jimmy Reeves, Chris Raines and Matt Beck—all of whom originated in Spitfire, a metalcore outfit popular at the start of the millennium. Sunndrug, by contrast, is a less stringent rock variant, bolstering an aurally extravagant presentation that entices a whole new spectrum of listeners.

I had the pleasure of speaking with Jimmy about the formation of the project, its thematic focus, and the contentment associated with artistic growth. Ultimately, he has maintained a positive outlook on the album’s success and is grateful for its backing via Mind over Matter Records.

ME: You and Chris conceptualized Sunndrug about two years ago. As far as the influences you showcase, did you feel Sunndrug best represented the overall sound?

Jimmy: Yeah, I think so! We kind of went into it with an experimental mindset—just try things out, follow what we thought was sounding cool, and what we’d get excited about.

ME: Quite a far cry from Spitfire, isn’t it?

ME: Besides you guys, Spitfire’s front man Matt Beck is also on board, and you’ve been a unit more or less since the mid-90s. Did the chemistry between you guys take some time to revamp, or has it stayed relatively consistent?

Jimmy: It was pretty instant as far as chemistry goes. Matt and Chris have known each other since they were really young, and I’ve known those guys since I was about 10, so that wasn’t hard at all. It’s just been really fun to work together again.

ME: I may have been in the minority, but I’d actually listened back to Spitfire’s The Dead Next Door album.

ME: Yeah, and I thought, “Stylistically, this is different from Sunndrug, but thematically, both bands are similar.” With Sunndrug, though, would you consider their presentation to be subtle, more open for interpretation?

Jimmy: Yeah, I think so. I think part of that is just us maturing as musicians and writers, and exploring some different stuff. We were pretty young when we wrote and finished [The Dead Next Door]. I think we were about 18, so that’s a good while now. Now we’re older (laughs)!

ME: Now I want to get to Exit Wounds, but first, I wanted to ask about your transition, moving back from New York to Virginia. Do you feel that Virginia has a pace that’s a lot more to your liking, and in turn, allowed you to be more productive?

Jimmy: Yeah. In fact, one of the big incentives for my moving back to Virginia was that Chris Raines was here. Then for the initial probably six months that we were working on the band, I was taking a bus back and forth from the city—down to Virginia and back. When we got to the place where we realized we wanted to do more with the project, and make it a band, it was an easy decision to move back down here.
As far as the productivity, I think it’s just living in a less frenetic environment. It’s cheaper and with a lot less pressure here. So that allowed us to focus and be productive in a way that we were able to finish the record.

ME: Onto Exit Wounds, the album definitely has varied structure about it: part alternative, part industrial, part blues rock. When would you say the sequencing of the tracks really came together?

Jimmy: We mixed last October, so a year ago, we were finishing the mixes. I think after we had worked with Andreas Magnusson on the mastering, we started getting a finished thing of tracks back. Each made the list. Chris and I, after listening through a bunch of times and emailing back and forth, we’d ask “What if we put the song here?” and that kind of thing.

ME: I’ve read that the album thematically centers on a man coming apart at the seams. “White Ladders” seems to deal with planning some kind of escape route toward being completely emotionally distant. Based on your own experience, were there times where you found yourself reminded of similar strain?

Jimmy: Yes. It wasn’t really during the making of the album, but at that point, for what I was writing about, I was pretty far down that road. It was more just the processing. For a song like “White Ladders,” I was trying to sum up all of those feelings into one song, and that was the one.

ME: I particularly like transition midway through the album—how “Stilts” is punctuated by the title track, which is an interlude. Did you intend to implement this interlude to extend the thematic context?

Jimmy: Yeah, I think so. Chris and I have always been fans of extra little pieces of music like that on records. We just felt that that specific one worked really well with the title. Some of the sound effects help communicate feelings that are being expressed throughout the whole record in an interesting way.

ME: Generally, when considering all the factors of this album, did it feel liberating not only to record these songs but to experience them in their final forms?

Jimmy: Oh, absolutely. I’m really proud that we finished it. I wasn’t really able to process any of that until it actually was finished. When listening back to the final mixes, it was almost like we were hearing everything for the first time; it was a cool moment.

ME: Speaking of experiences, you‘d set up a limited vinyl release for the album. Were you aiming for that select group of dedicated listeners to get a taste of its full potential?

Jimmy: I don’t know if that was a conscious choice. I think it’s just that we’re all fans of vinyl. We love different variants of it, and limited edition merchandise from bands—any sort of things that you can collect. Vinyl was at the top of our list of ways we wanted to release this album. We’re excited and lucky to be working with Mind over Matter; that worked out really well!

ME: What do you think Exit Wounds has provided for you guys as a band, now that it’s finally out?

Jimmy: I think when an album is complete, you can’t really mess with it anymore or tweak any of the sounds. You get a good picture of where your writing is at, lyrically and musically. It’s been informative for us as songwriters to see where we’re at, and maybe where we’d want to go next.

Jimmy: I’d like to thank Mind over Matter Records, and everyone who had pre-ordered, purchased, or is streaming the album. Thanks for all the support so far!

Check out the lyric video for “Shining”:

I come from a family who is passionate about all things music. I learned to sing at an early age, and by 13, had my very own Fender Strat guitar. I tried my hardest at learning all that I could. Because I was born with cerebral palsy, I had to teach myself an adaptive playing style. I learned to write and record my own music, despite these difficulties. In college, I started making great use of my writing abilities by reviewing music, as well as copy editing. I guess it's best to stick with what you know, while welcoming a fair challenge at the same time.
Previous Gallery: The Devil Wears Prada at The Nile Theater Mesa, AZ 10/31/16
Next Gallery: Trevor Sensor at Off Broadway in St. Louis, MO on 10.27.16