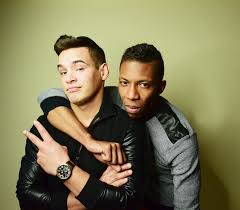 Epoch Failure – members, Billy Joe Marrero (aka “Billy The Kidd”) and Nick Young (aka “Nickey Knoxx”) have forged a message through their music that is grounded in hope and ambition –an attribute gained from overcoming hard times in their respective lives. The fellas have created music that speaks to real issues in an authentic voice that touches hearts and lifts spirits. Their inspirational music resonates with anyone who is fighting to overcome obstacles and persevere through their own trials and tribulations. They have already grabbed the attention of many with their original single “Champion” and their imaginative reinvention of Bon Jovi’s “Livin’ on a Prayer.”  It’s not surprising their message of steadfast determination and unyielding tenacity has garnered them major success in the sports-licensing world. Epoch Failure’s songs have been placed in tv, games, movies, advertisements, and highlight reels.

Check out our Q&A with Epoch Failure below:

1. How did the band form/come to be?
NICK- Billy’s cousin introduced us years prior to when we actually decided to work together.  We were casual friends, but it was a long courting process (on both sides) before we started traveling down the Epoch road.  Once we had the core, we knew we had to expand and become a full band, particularly to bring life and fire to our live show.  I have known our DJ (Big Jae) since 9th Grade; we’re like brothers.  I met our bassist (Low Down Dirty Shane) while working together at an electronics store many years ago.  At one point, after hearing about our project, Shane said to me, ”Hit me up, if you ever need a bass player.”  He probably didn’t think I would, but when we were ready, he was the first one I called.  I met our drummer (Mad Mike) at an event called, The Philadelphia Rock Lottery.  It was a thing where 20 people met in a park, pulled straws, and then formed bands to write and perform later that day. We worked together there in the park, and he just picked everything up so quickly and added his own flare.  I knew I had to make him part of Epoch Failure.

2. What is the story behind the name of the band?
NICK- Since Billy and I had both done our solo thing for many years (and never made much headway in the music industry), we both decided that this time failure was not an option. With this emboldened attitude, along with the new music we were creating together, we were entering a new realm… a new age… a new epoch. We decided this would be our last Epoch of Failure.  Billy didn’t like the E-Pok pronunciation, and he suggested we just say it like “Epic.”  I agreed, so we exercised our poetic license and the rest is history.  So far it’s been a wild and incredible ride.  What we’ve managed to accomplish has been far from failure and, in our minds, nothing short of epic!

3. Your sound has been described as “inspirational music resonates with anyone who is fighting to overcome obstacles and persevere through their own trials and tribulations” How important is it for you to send this message to your listeners, especially after overcoming hardships yourself?
NICK- We genuinely hope that everyone who hears our music feels something. It could be anger, disgust, whatever.  But hopefully not those.  Haha.  Seriously, we hope people feel the love and passion behind what we do; we hope they’re inspired.  But, in the end, as long as it gets people to feel something… then we’ve succeeded. Part of life is dealing with obstacles and pushing through, so you can live to fight another day. During these times, I hope our music can be like a soundtrack for our listeners’ lives.  And, in the end, hopefully we all make it out knowing we gave it our all.

BILLY- It’s a big part of why we do this. Not only to inspire, but to encourage strength and perseverance, which are key ingredients for success and survival.  Down the road, when it’s all said and done, and people look back at Epoch Failure… I hope we’re remembered for our ability to help people rise above their struggles and find their way to the top (wherever and whatever that may be).

4.”Champion” was recently featured on the television show “Pitch.” Do you watch when your music is used on ESPN or other shows? If so what is that feeling like?
NICK- I always try to watch whenever our music is being featured. When I’m creating, I’m a visual writer. Therefore, I love to see how somebody else sets a scene or mood using my lyrics. And then when I’m actually seeing and hearing the placement, the feeling is really indescribable.  It’s awesome.

BILLY- Of course we watch it! And when I see it, there’s always that “little kid” inside me jumping and screaming for joy.  You know, that’s where this all started for us; it’s been a dream since we were young kids.  So to come all this way, and have our songs played on these huge platforms… it’s almost too big for us to even comprehend now.

5. Who came up with the concept for your video “Let the Fire Glow”?
BILLY- Our director Jason Schultz (Collective Detroit) came up with the general treatment for “Let the Fire Glow”.  Jason also produced and directed our “Champion” video.  We love working with him.  In addition, our manager John A. Sepetys (aka “Papa John”) worked with Jason to fine tune and tweak some elements of the storyline and flow.  Papa John normally has one of his hands on the reins with anything we do creatively.  He helps make sure we’re always staying on point visually and sonically. And he makes sure our performances match up to who we are, and to what’s being represented in a song.

6. What was it like filming that music video for you?
BILLY- First, let me start by saying Epoch Failure needs a better scheduling coordinator for our video shoots.  So far, when we’ve been filming, it’s either been freeeeezing cold or insanely hoooot! Haha.  But no, seriously, each video has been an amazing journey from start to finish. This holds true in terms of the process, the crew, the locations, everything.  So far we’ve filmed everything in Detroit, so the Motor City is deeply rooted in the visual fabric of Epoch Failure.

7. Your music resonates with a lot of athletes. Was this something you expected when writing your music?
NICK- Honestly, starting off, we had no idea our music would be so universally well-received in the sports world.  We write about our own personal fights and triumphs.  Since we’re both sports fans, maybe we tend to use language that fits well in a sports context.  And, you know, it just works. While our goal was always to inspire, we never knew exactly who we’d be inspiring (aside from ourselves). It’s a nice happy accident that it’s blown up so big in this realm.

8. What is the first and last album you bought?
NICK- First was Jay Z– Reasonable Doubt.  Last was Frank Ocean– Blonde.
BTK- First was a Beastie Boys greatest hits. Last was FutureSex/LoveSounds by Justin Timberlake.

9. What is your favorite album of 2016 thus far?
NICK- Coloring Book by Chance The Rapper
BILLY-  The Life of Pablo by Kanye West

10. Any message to your fans?
NICK- To everyone out there who has been listening and watching us as we’ve grown–– Thank you for believing in us.  Your support has been truly amazing. We are blessed to have a “foot in the door” in this competitive music industry where there are thousands of other incredibly talented artists.  We’re honored to just be part of the conversation, and it’s because of all of you. I invite all of you to continue on this journey with us because our ride is just beginning, and the best is yet to come.  For any new listeners who are just discovering us, we always love to hear from you.  So reach out and let us know what songs you like, and what online rabbit hole you went down to find our music.

BILLY- I can honestly say, I’ve never believed in myself and our music more than I do now. And it’s because of all the awesome people who are pressing “Play” to hear our songs. It means the world to us.  In the end it’s a two-way street that’s all about a mutual exchange of love, good vibes and cold beer. To uphold our part… we promise to keep making music that resonates with everyone from the guys sweeping hair at ya barbershop, to the lady working her shift at the hospital, to the little kid singing our songs in the mirror, to our fans and family members and friends coming to every show.  Across the board, we promise to keep delivering the realest, most heartfelt and fun songs we can! For us, it’s Grammy’s or  bust!     #doitEpoch