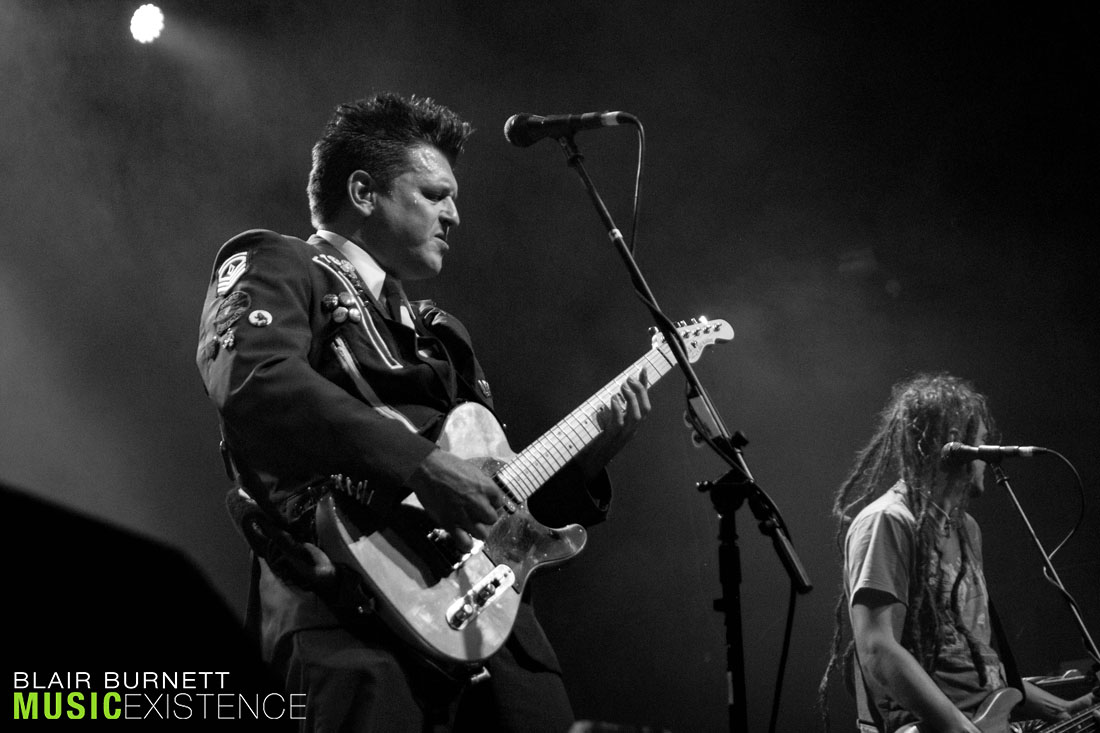 As the lights went down in Glasgow’s O2 Academy, the crowd were amped up and ready for Less Than Jake. I didn’t know what to expect from the Florida Ska Punk Rockers but as soon as I seen Buddy Schaub run on and around the stage frantically with his trombone…I knew this was going to be a good night. The band kicked off their set with such high energy and matched that during “Johnny Quest Thinks We’re Sellouts” when confetti cannons were fired into the crowd.

This Glasgow crowd were an interesting mix. The whole venue was a dance floor, not a single song did anyone stand still; the drinks were flowing and in the heart of the crowd mosh pits, circle pits and crowd surfers were making the most of their night! Everyone was having fun – even friends of the band who crashed the stage with an oversized inflatable bottle of Fireball – as this is the Fuelled By Fire Tour. My personal favourite stage crashers was the topless man with an alien mask…who simply stood in the corner of the stage eating a bag of crisps as the band blasted out “The Ghosts Of Me And You”. This was the first time the whole venue erupted into a frenzy of dancing and crowd surfing – I could feel the floor shaking from the power of the crowd. This was a song I have never heard before but it has now been added to my playlist thanks to the incredibly powerful vocals from DeMakes.

It is very obvious that Less Than Jake love their fans, as after almost every song Demakes and others in the band would take the time to talk to the crowd. One asking “who has work tomorrow” to which most of the venue raised their hands – the band was so thankful for the Glasgow crowd though. Telling us they knew even though it was a Sunday night, Glasgow would still know how to party!

And party Glasgow did when the venue turned into a beach ball party during “Overrated (Everything Is)” This was a song where Trombonist, Buddy, again turned into the stage clown – playing dodge ball with fans as 15 beach balls were thrown around the venue.

After some banter with a balcony security guard who had to watch fans on the balcony with his back to the stage, bassist Roger Lima took time to ask the the crowd “who travelled by bus or train from a shitty little town to come to this show?” He thanked everyone with their hands in the air as the band burst into “History Of A Boring Town”. The powerful guitar solo from this song – in my mind – was only matched by something I never thought I’d see. A saxophone solo from Peter Wasilewski during one of my personal favourites “The Science Of Selling Yourself Short”.

Again DeMakes was showing his appreciation for his fans when he brought two contest winners on stage. As Demakes explained, these two won lunch with the band before the show and were greeted on stage with shots of Fireball. He went on to say how polite everyone in Glasgow seems to be, telling us he likes to talk shit about cities on tour but here in Glasgow “I can’t talk shit about you. You’re all just fantastic!” The contest winners were kept on stage to dance during “Nervous In The Alley” which also saw Buddy up to his antics again – climbing on two sets of PA speakers with is trombone to start the song.

It seems every single Less Than Jake song has some kind of live moment that makes it memorable but the toilet paper blowers during “Good Enough” might just have been my favourite! But this band know how to go out with a bang. They addressed the crowd one last time, inviting them to their hometown…”Gainesville Rock City”. The crowd once again was a frenzy of crowd surfers and dancers as DeMakes owns the stage with the powerful punk rock guitar riff and the crowd was loving every minute as the belted out the words in such an incredible sing along. One last time the Confetti cannons exploded as the band left the stage.

This crowd was having none of it. In the minutes that followed chants came out across the crowd for “LESS THAN JAKE, LESS THAN JAKE”, “WAN MARE TUNE” (Glaswegian for: One More Song) but none more powerful than the in sync clap and stomp of the whole crowd that echo’d throughout the building, again shaking the floor!

DeMakes made his way on stage to the roar of the crowd soon joined by his fellow bandmates as they kicked in to “The Rest Of My Life”. Their three song encore was nothing but a craze of good times, dancing and partying no matter where you were in the crowd. As the crowd settled in the last notes of “Look What Happened” the crowd were eager for what came next.

I could tell “All My Best Friends Are Metalheads” was so highly anticipated when I heard many “YES!”s coming from the crowd as the opening sample was played. For one final time in Glasgow the crowd went crazy! It suddenly dawned on me, Less Than Jake are a band that you simply can’t listen to without headbanging and smiling. Their use of sax and trombone mixed with punk rock creates such a positive vibe and this high energy song was such a perfect ending to a great night.

19 Years old from Glasgow Scotland, currently studying Radio at City of Glasgow College in conjunction with my own Youtube Channel!
@johnhughxs
Previous Album Review. Cinders
Next Gallery: Mariachi El Bronx at the O2 Academy in Glasgow, 09.10.16