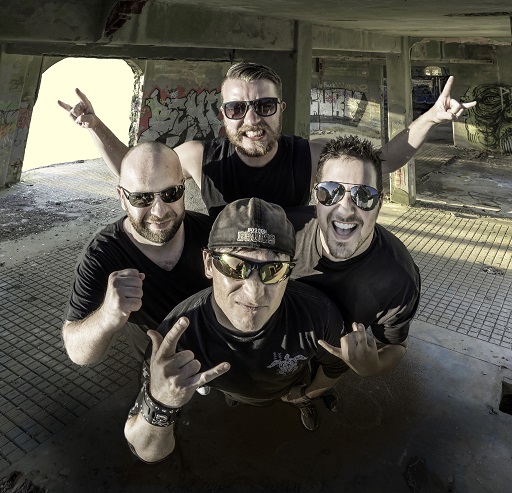 Hailing from Boston, Massachusettes, hard rock quartet Atlas Will Sound might not be household names just yet, though their young career is just getting started and they have already established themselves as a band to keep an eye on. Founding members Johnny Bevilacqua and Than Morse have been performing separately for a respectable amount of time but their eventual meeting and collaboration seems to have brought out the best from both artists. With the addition of other group members Matt Ezyk and Eric Sheppard, Atlas Will Sound have put together a powerful dose of modern rock music, as showcased in their singles released so far, most notably their latest track “Drop Terrorist.”

The group’s previous single, “August,” does a nice job of presenting their talent. With technical guitar work, raspy vocals, and a catchy enough chorus, “August” is a solid introduction to the band’s sound, which is somewhat similar to Citizen Zero, a group that was also featured on the site not too long ago. Their follow up single “Drop Terrorist” shows the band continuing down their abrasive rock and roll path, though they’re also already showing to be tinkering with their style and songwriting along the way. With nice rhythm in their instrumentation and gritty vocals that are easily comparable to those of someone like Rob Zombie, Atlas Will Sound put together an impressive track, especially considering that they are still so early in their lifespan.

Lyrically, “Drop Terrorist” is an interesting case. The band describes the song as a take on how the media portrays all of the negativity that’s currently taking place throughout the world. While this certainly isn’t breaking new grounds with its subject matter, the band definitely does a nice job of not coming across as too preachy or heavy handed. The track simply gives listeners a glimpse into how the band is viewing everything that reality is harshly throwing around. The track is set up as a confrontation more than anything, making listeners take into consideration why audiences absorb the content that the media twists and turns.

Atlas Will Sound might have a slightly cliche sound, but they’ve shown clear potential with what’s been put out so far. With more singles set to come out later this year, Atlas Will Sound seem to be gaining some momentum which will surely aid them in the buildup to their eventual first full length release. As of now, Atlas Will Sound possess the makings of a bright future and it wouldn’t be surprising to see more of them in the future.