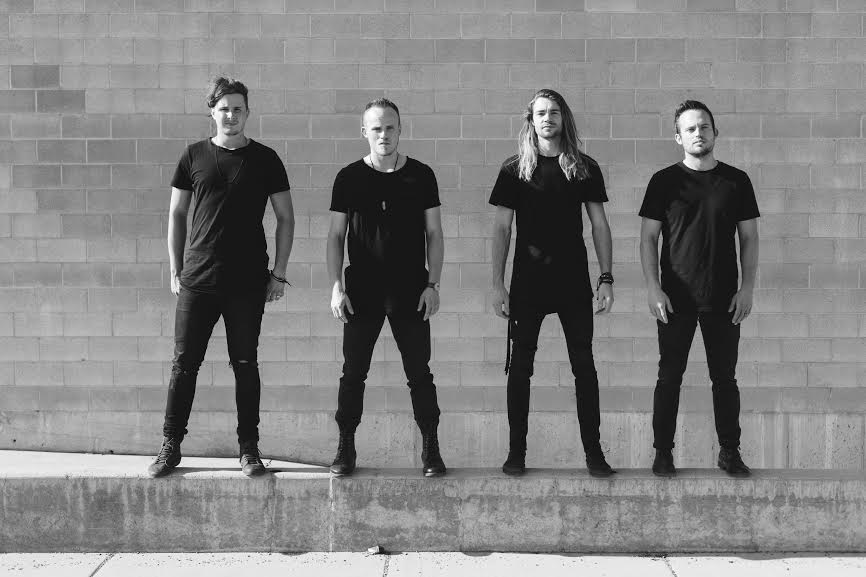 Since forming in 2014, Utah’s Foreign Figures has comprised of vocalist Eric Michels, guitarist Jonny Tanner, bassist Seth Dunshee, and drummer Steve Michels. The band continues to spread a poignant, reverberating message of faith upon their listeners. In fact, the efficacy of faith has worked wonders for them. Their debut Come Alive EP earned them international acclaim, allowing licensing deals from TuneCore, TV Land, and Fox Sports. But although this is an honest to goodness career milestone, it is only the beginning.

The band’s follow-up, Paradigm, extends beyond the scope of their sonic and thematic capabilities. It is stylistically supercharged by well-crafted reverb tones and hook-laden energy. Right from its prelude track “(Panorama),” a solid foundation for the album is aptly laid. The gradually progressive synth melody represents both the title and album art, like a panoramic view of a lion roaming in freedom. Indeed, the idea of man and animal souls being intertwined plays a thematic part throughout the album. “Vertigo,” the track to follow, signifies the process of obtaining humility. Through experiencing delusions of invincibility, one begins to recognize their flaws and acknowledge them with a sense of maturity. As the guitars and percussion transition from verse to chorus, both elements fulfill their part in accentuating the vocals. “Fire” implies the element of a challenging scenario that, when seized, can prove to be a transcendental experience. There’s a persistent feeling of tenacity, as well as coming to terms with past pain and insecurity. I can see why this track is favored to a great extent over the others; its chorus is boldly developed, catchy, and memorable nonetheless. Toward the fourth track, “Alarmed,” the impact of the band’s message has increased substantially. Its foundation is built upon dynamic piano strikes, accompanied by reverberated lead guitars. As the lyrics progress, a new perspective unfolds—to express oneself in the midst of distorted public opinion. I appreciated how this presentation accumulates into a climax at the 2:42 mark. Michels’ vocals blend nicely with the instrumentation, easing into a falsetto and complementing the reverb.

An emphasized level of dimension characterizes the album’s midpoint. On “Fearless,” for example, the main synth melody feels prominent while still leaving space for the guitars. The verse melody also exhibits a commanding sensibility that works hand-in-hand with the percussion. More subtly used are vocal effects that enhance Michels’ delivery. All of said elements contribute to the portrayal of a nurtured soul—one exuding confidence, but without arrogance. I found the track “Outlier” quite surprising. In spite of its short length, it packs plenty of power using only vocals and claps. It is the defining pick-me-up in terms of restoring that confidence, for when an opposing force had momentarily gained the upper hand. From the latter part of the album, the title track centers around having found purpose in life. Both the guitars and vocals exhibit a similar uplifting feel much like the previous song. In the bridge, Michels reflects on his culminating effort through time as it attributes to his present growth. “If I’m Honest” further expounds on Michel’s clarity, particularly by his reassuring others that he is able to learn from his flaws. What I also appreciated in this song was a kind of subtle warmth to the synth textures that interplayed with the otherwise bright vocals. “Force of Nature” picks up in overseeing the greater extent of his growth. Whether positive or negative, he observes his surroundings with a heightened sense of awareness and feels fulfilled by simply appreciating the challenges of life. The final track, “Lionheart,” puts these moments in perspective, this time from a much older and nostalgic state of mind. Michels dwells on past glory, to the point where it is shaped by a fantastical aesthetic. This particular buildup of instrumentation is not only sensible, but the best developed of those on the album. Toward the 3:05 mark, certain heaviness emanates from the wall of guitars—interestingly more so with the backing piano accompaniment. As the intensity fades, Michels recognizes that his strong will is no longer by choice, but a quality he will maintain for the rest of his life.

Overall, Paradigm is an audacious presentation from start to finish. Its instrumentation sustains the combinative approach of accessibility and textural depth, while Michels’ lyrical insight remains top notch and undeterred. Once again, Foreign Figures prove that faith is not a crutch, but a tool to be utilized in conjunction with assiduous effort and tenacity.

I come from a family who is passionate about all things music. I learned to sing at an early age, and by 13, had my very own Fender Strat guitar. I tried my hardest at learning all that I could. Because I was born with cerebral palsy, I had to teach myself an adaptive playing style. I learned to write and record my own music, despite these difficulties. In college, I started making great use of my writing abilities by reviewing music, as well as copy editing. I guess it's best to stick with what you know, while welcoming a fair challenge at the same time.
Previous Buffalo Singer Receives Nomination at the 2016 Atlanta Hip Hop Awards
Next Gallery: The Kills at Loufest in St. Louis, MO on 9.11.16