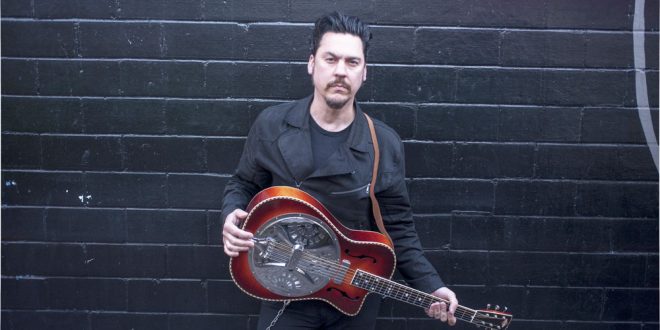 Like any other industry, the music business has its fair share of hidden talents. Whether they be smaller performers who have yet to gain a large amount of notoriety or an artist who simply prefers to remain out of the spotlight, there are always going to be musicians who don’t quite gain a following that would be expected. In this case, singer/songwriter Jesse Dayton has been performing for several decades now, having earned the respect of many of his fellow performers throughout the years. Dayton has worked with the likes of Willie Nelson, Johnny Cash, Kris Kristofferson, and even toured with punk legends X back in 2014 where he stepped in for original guitarist Billy Zoom. With such an impressive resume, Dayton could best be described as a musician’s musician. He’s an artist who has been around for quite a while and has undoubtedly put together a fantastic track record through his experience. Now that Mr. Dayton has contributed to so many iconic artists throughout his career, this time around he has chosen to focus on his own material with his latest solo record, The Revealer.

Within the first opening minutes of his record, it’s evident that Dayton is proud to wear his influences on his sleeve. Dayton blends together sounds that range from classic country, blues, and even rockabilly at times, and to his credit, the Austin-based musician is quite skilled at performing all of these genres throughout the album. Whether it be the high energy, Jerry Lee Lewis-inspired fun of “Holy Ghost Rock N Roller” or the tender, genuine ballad “Mrs. Victoria (Beautiful Thing),” Mr. Dayton truly does a fantastic job of showcasing his wide range of talents. Dayton’s narrative-driven lyrics are highly reminiscent of older country hits but his power and enthusiasm is without a doubt a characteristic of the old school punk rock that also inspired him in his early years. With a sound that’s rooted in earlier genres, it’s easy to assume that the album might come across as dated, but it surprisingly fits in well with the more modern era of Southern music. The track “Possum Ran Over My Grave” sounds like something that Drive-By Truckers could have put onto their 2004 record The Dirty South thanks to its crisp vocals and somewhat gritty lyrics. It’s moments like this that make it evident that Dayton isn’t just here to remind listeners of how good country used to be, he’s here to prove how solid it still can be.

With hard hitting tracks scattered throughout the album, that’s not to say that Dayton doesn’t find moments to have some fun and fluff some sincere silliness as well. Tracks like “Take Out the Trash” and “I’m at Home Getting Hammered (While She’s Out Gettin’ Nailed)” flaunt Dayton’s more humorous side and show that there is more too him as a performer than simple stone-faced narratives. Whether he’s making listeners smile or shed a tear, Dayton has many different faces as a musician, yet he remains skilled no matter which route he takes. By using his older style of influences, Dayton has successfully built a sound that should capture the ears of classic country fans while still being accessible to newer listeners. For listeners who aren’t the biggest fans of the many genres that Dayton combines, then there isn’t much here that will likely change their mind. However, for those that long for the style of country that was prominent in the Johnny Cash era, then this record will surely be a treat.

With a musician who has been around for as long as Dayton, it’s not surprising that he’s become so good at his craft by this point. The Revealer isn’t just an enjoyable album for classic country fans, it’s a testament to how much a diverse resume can aid a performer. Dayton’s wide range of musical influences are apparent throughout his album and that’s one of the driving factors that makes it such a fun ride, along with his undeniable personality. Whatever it may be that initially draws listeners into Dayton’s sound, there will surely be an abundant number of other factors on The Revealer that keep people coming back for more.

Cain Miller is an aspiring writer who hopes to work his way up and gain notoriety for his material. Having written about film, television, music, and sports, Cain is always looking to gain as much experience as he can and continue to improve his writing abilities.
@cainemiller
Previous Bob Lien – Color of Sky
Next Deep Matter & Somn3um – Romancing