Home / Album Reviews / Angie and the Deserters – Blood Like Wine 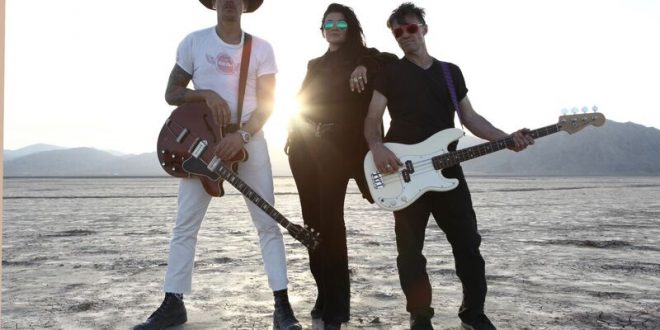 This powerhouse outing represents the next natural step in the development of Angie and the Deserters. Their debut full length garnered considerable praise as evidence of life in an otherwise moribund genre and their latest release, Blood Like Wine, goes even further in carving out a particular notch in the traditional American music community. This isn’t just a country or blues band. Angie and the Deserters cross genre lines frequently and with great aplomb – there’s literally something to like here for a music lover of every stripe. The majority of their artistic energies are expended pursuing a blues or country music model, but rock and pop music alike make their presence felt often and in unexpected ways. A variety of instrumentation is employed to make their musical point, but the most elastic musical element in the mix, by far, is Angie Bruyere’s voice. It has the cachet of instant authenticity – she embodies experience rather than merely dramatizing it, though her talents are considerable in that area as well.

Blood Like Wine starts off with “Country Radio”. It’s a wound-up tight romping gut punch of rhythm and blues with reverb slapped over the guitars and frequent, energy packed rave ups. It’s, likewise, a guaranteed crowd pleaser and likely serves the same purpose in a concert set list that it does here – it grabs listeners’’ by the collar and shakes them to attention. Bruyere delivers one of her most inspired performances on the release. The second song, “Smile”, is much more relaxed than the opening effort and has an easy-going confidence sure to immediately win over many listeners. Not everyone craves the high octane juice the band served up with its essential song and their willingness to cover multiple stylistic bases bodes well for their future as well as testifying to their skills. Blood Like Wine shifts mood yet again on the grim track “The Gift”. The album’s third song is a hushed, chilling reflection on self-destructive, possibly homicidal, obsession with another, but there are no judgments here. Instead, Angie looks to convey the story and character honestly, without pretense, and does so brilliantly.

“Ain’t Goin’ Down” will strike many listeners as one of the more personal tracks on Blood Like Wine, but even stripped of that suggestion, the song still connects as a strong assertive statement. It’s a steadily growing strength reflected here musically as the band, once more, shows off their artistic restraint rather than lunging for temporarily entertaining effects that aren’t capable of capturing someone’s attention and holding it. The album’s last song, “Don’t Cry”, is the supreme realization of this approach – it builds a piece at a time, slowly, layering its musical effects with a cool hand and making the final result one of the most memorable works on this album. Angie and the Deserters aren’t concerned with crafting make you smile party songs or novelty numbers destined to be barely remembered five years after their release. These songs, instead, feel like the work of a band reaching for something greater.