Home / Album Reviews / EP Review: Lightscape – For Present, For Past (Out September 2) 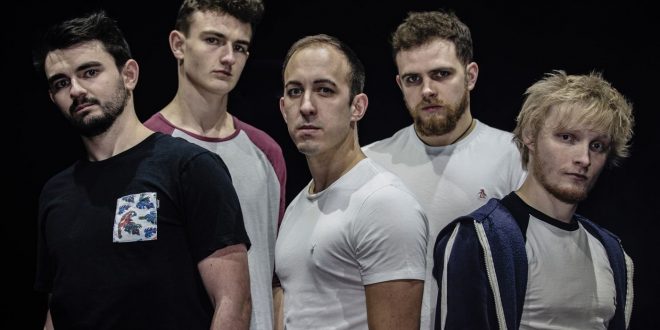 EP Review: Lightscape – For Present, For Past (Out September 2)

Last year, Norwich, England’s Lightscape debuted with a competent blend of alternative riffing and progressive textures. Within a relatively short span, assiduous work and tenacity would reward them considerably. The quintet went on earning large-scale exposure, having opened for acclaimed post-hardcore act Lonely the Brave as well as appearing on BBC Music’s Introducing radio program. By that medium, they have already forged a new path in their releasing a follow-up single, “Running”. In fact, the track kicks off the band’s sophomore EP, For Present, For Past, which is slated for release next month.

In relation to the EP’s sequence, “Running” fosters a solid sense of pace with its pre-delay buildup. Already it is quite involved texture-wise. A heart-beat style synth pattern sits amidst percussive plucking at the base, and anthemic soloing at the top. Once the riffs enter in, I could still perceive the synth pattern and plucking that comprised the song’s foundation. The bass and drums emit a certain bounce which works much to the benefit of the lead guitar. Front man Will Overton belts early in the verses, but makes smart use of space for the instrumentation. I appreciated how the band proceeds to implement this hook factor, particularly in the sparse vocal delay feedback. Each verse phase is capped by a melodic wall of sound, which is bolstered by equally harmonized vocals and guitars. The song lyrically deals with someone struggling to accept that their soul mate has gone distant. Through the main guitar’s shifting to a metal-driven aesthetic, the anxiety is gradually piling. The breakdown around the 2:50 mark showcases the extent to which the person cannot be reached, along with an undermining concern for the other’s safety and well-being. “You Leave Me Here” hints at a continuing conceptual aesthetic, its title lifted from the first line of the previous song’s chorus. This directly represents the following stage of heartbreak—the residual scarring after the emotional hit. Overton’s vocals contain similar prowess in their range, conveying a sense of understandable weightlessness and uncertainty. Emphasizing the subject’s dismay are drizzling guitar notes and an encompassing synth pad—much like raindrops drops trickling from a large cloud mass. The reverb from the double-tom strike is another significant element, as if a consistent reminder of such resounding pain. His mind returns to reality by 2:10, continuing through a phase of intensely chugging chord sequences that suggest a firm determination. By the final track, “Blinded by the Lights,” he has come to terms with the complexity of the situation. Even through the occasional red-herrings of false hope (“Are you in there, my friend?”), the subject is continually ridden with guilt. Following the breakdown at 2:23, I could really get a sense of the band’s fluent instrumental bedding. The vocals then return in a distorted and newly stationary state, setting the catalyst for a climactic bridge. When that is utilized, Overton makes effective use of both falsetto and projected singing styles. Once again, even though the context of the situation seems hopeless, there is the latent possibility of reconciliation with that someone who was once a fixture of their everyday life.

Overall, For Present, For Past is a three-part saga of stylistic and thematic poignancy. I found myself deeply relating to its portrayal of indefinite loss, as it comprises bouts of fluctuating hope and futility. The riffs and textures all sensible in their utilization and feel especially fitting to the concept. Whether Lightscape continues along an EP framework, or builds to that of a full-length, I have no doubts that they will explore this concept further to exceptional depth.

I come from a family who is passionate about all things music. I learned to sing at an early age, and by 13, had my very own Fender Strat guitar. I tried my hardest at learning all that I could. Because I was born with cerebral palsy, I had to teach myself an adaptive playing style. I learned to write and record my own music, despite these difficulties. In college, I started making great use of my writing abilities by reviewing music, as well as copy editing. I guess it's best to stick with what you know, while welcoming a fair challenge at the same time.
Previous Gallery: Wiz Khalifa at Hollywood Casino Amphitheatre in St. Louis, MO on 8.17.16
Next Jackson Browne at The City National Civic, San Jose,CA ~ August 16 2016