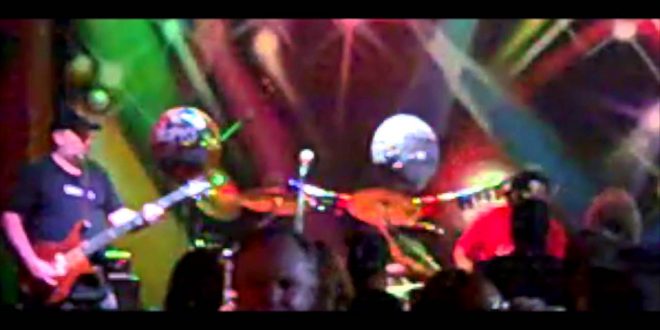 The Spiders are led by Lead Guitarist and Vocalist, Nick DeStefano who has teamed up with John Henderson on Bass and Nestor Arcelay on Drums, both longtime veterans of the NJ club circuit, this power trio has spent the last few years developing a very loyal following, and they hope with the release of their powerful new single “Election Day” they will get the mainstream exposure they truly deserve.

On your way to the polls this year you might want to stop off at the video for “Election Day” by The Spiders, because if anything it will get you in the spirit of things and could even encourage your decision to choose between the lesser of two evils if you were planning on sitting it out. This is a great way to get into the whole process, if you like rock ‘n roll that is. A beefy guitar track is well helped along by some great lyrics behind the brief but ever present vocals with a huge chorus that repeats so well you can’t get out of your head. It’s instrumentally much different than their track “We Seek Higher Ground,” with a harder sound. But the vocals are a little reminiscent of it. This shows they’ve made progress in their efforts to up their game, and it’s a successful attempt to these ears. This is some kind of hit potential effort if you really listen, and I would bet it even surprised them to come out sounding this way. It’s nothing short of fantastic in every way. The video itself plays like more of a teaser and reminder to get out and vote, so it adds to the depth of the music without turning off the listener as they also become the viewer to get the full concept. So, put together this is a great combo for that reason, but the song should travel much further than the election and could go down one of the bands best works. Let’s not forget that this election process has played out so far like a who’s who of clowns and it’s a wonder anyone is on board except for the full on political fanatics who want to see it get as nasty as it can. I’m not a political person but I can see that much with ease. It’s really down and dirty, leaving the choosing up to the most politically passionate. There just seems to be no dimmer switch but they do their best to send the proper advice, which is to get involved if you care about America. And that’s all one can really do here, which they perfectly execute in brilliant way by keeping it light hearted and fun, from beginning to end. Starting with a menacing guitar bite. This picks up into some words that make you think, followed by a popping chorus that takes the whole thing over the top. It’s almost distracting to watch the video, so, both are a recommended treat together or separately. There are plenty of pop ups in the video, done like a series of memes, and it’s really nothing to fuss about because it reflects everything the people see around them in the current political scheme of things. Most are just flashing whatever statements they can make, to get people on board or possibly find ourselves either not showing up to vote, or making the wrong choice when we do. And it’s not that a song can choose for anyone, but it can do a part in helping. But in the end we all need a spirit boost once in a while and this does the business, and Nick DeStefano also comes off more vibrant than ever on vocals and guitar.

This by no means leaves the rhythm section in the dust, he just gets real up-front on this and takes the reigns, so to speak. And as for the video in the overall shape of things isn’t a bad thing to watch as they put together the usual face-off style clippings and keep them rolling with some occasional other statements which indicate the state of the nation to begin with. This is all done cleverly with a sophisticated freedom rock sound. Don’t just go out and get this, do what it’s asking and it won’t defeat any purpose while you enjoy it.