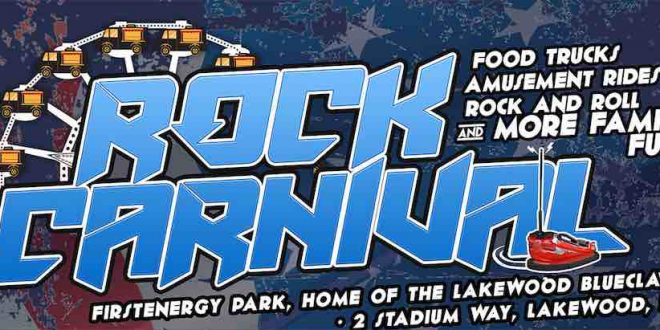 Let the countdown begin! There are just two months remaining until the second annual ROCK CARNIVAL – taking place on September 30, October 1 and October 2 at its new location in Lakewood, NJ at FirstEnergy Park – home of the Lakewood Blue Claws! The festival is thrilled to be hosted at their new home, which will feature a more efficient layout for attendees to enjoy activities.

“Our ballpark is well positioned with ample space on the field, the seats, the concourse, and the front of the park, plus with substantial parking space, to maximize the experience for each fan,” states Steve Farago, VP of Operations & Events, Lakewood Blue Claws.

More room also equals more food trucks! As last year’s attendees know, one of the largest attractions at the ROCK CARNIVAL is the wide array of food trucks. Based on 2015’s high demand, the number of food trucks serving their scrumptious culinary creations at this year’s carnival has been boosted to 50! See below for a preliminary list of returning and new food truck vendors:

Additionally, the ROCK CARNIVAL will feature several local arts and entertainment, awareness and clothing vendors. Vendors will include:

As with its inaugural year – which drew a staggering 50,000+ attendees – the second annual ROCK CARNIVAL will also feature classic amusement rides and entertainment, high-action Professional Wrestling, a wide selection of tasty brews, pig racing and more. This year’s event will also see the addition of a children’s fun zone. It’s a weekend of big fun for the whole family!

GRAMMY® Award-winning band Halestorm‘s latest album, Into The Wild Life, debuted in the top 5 on the SoundScan/Billboard 200 upon its release last year while also entering Billboard’s Top Hard Rock Albums tally at #1 – both marking Halestorm‘s highest chart placement to date. The album’s first three singles reached the top 5 at active rock. Halestormare currently on the road supporting Shinedown on the Carnival of Madness Tour before heading out later this fall for another leg of their headline tour with support from Lita Ford and Dorothy.

Halestorm states, “SUNDAY, SUNDAY, SUNDAY! We can’t wait to bring the rock n’ roll madness with all of our Freaks at the second annual ROCK CARNIVAL! We just really want to watch the pig racing! See you there!”

RIAA Gold-Certified rockers The Used will join ROCK CARNIVAL along their 2016 15th anniversary tour, celebrating the release of their highly-influential self-titled record. Upon the album’s release, The Used became the unexpected face of a new generation of youth culture. This year, the band released a reimagined acoustic version of that same seminal record, recorded live with a full orchestra and entitled Live and Acoustic at the Palace. The Used‘s most recent full-length studio album, Imaginary Enemy, entered the Billboard Independent Album chart at #1 in its first week, while landing within the Top 20 on the Billboard 200 chart.

The Used singer Bert McCracken adds, “We look forward to heading back to NJ for the Rock Carnival to play for those die-hard Used fans. See you all in October!”

“ROCK CARNIVAL is very excited to finally announce Halestorm, The Used and the others who will help round out this year’s line-up,” states ROCK CARNIVAL producer John D’Esposito. “The festival outlined a plan that would deliver famous classic rock Friday, strong family friendly rock packaging Saturday and to close Sunday with active radio rock headliner. We put a strong emphasis on stacking the line up with New Jersey and immediate area acts who have had a long tradition of playing the infamous Jersey rock scene over years. Horns in the air, let’s get ready to rock!”

See below for the current line-up, with more artists being added leading up to the main event.

The ROCK CARNIVAL is produced by Stan Levinstone Presents and GameLoud.

Previous Crown The Empire Hitting The Road This Fall in Support of Retrograde
Next Sir Ivan – Imagine: The Remixes