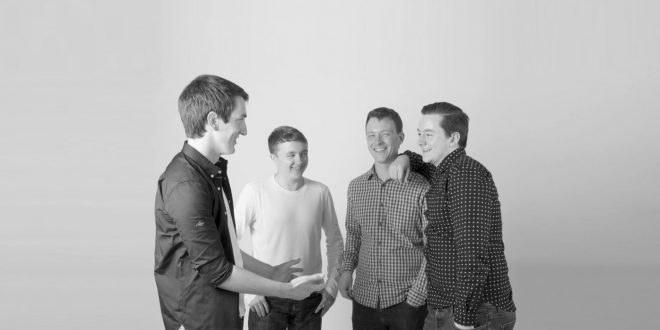 In mid-2015, Gentlemen Jackals was formed by singer-guitarist Mark Wilson, second guitarist Craig McMahon, bassist-singer Scott Thomson and drummer Douglas Harden. The Dunfermline-bred quartet has since generated a buzz in the country’s capital, as well as Edinburgh and Fife, having crafted a distinctive musical identity. It is described by the band as “a combination of late 80s-early 90s American alt rock and British new wave”. Diversity is much sought after in this generation, and that’s just one of the areas where this band delivers.

Indeed, their debut single, “Hold My Body,” utilizes these influences substantially. I was pleasantly surprised that it wasn’t some blatant showcase of 80s kitsch and 90s fuzz–much more than that. In fact, it’s actually the subtle implementation of influences that makes the song work. The tweeness of the opening chord sequence reminds me of material from NME’s C86 compilation. Add to that Wilson’s bright, sun-drenched vocal charm, and there’s something that instantly appeals to both mainstream and underground. 30 seconds into the song, traces of American alternative come through in both the lead melodies and percussion. Toward the latter phases of each verse, there’s a more noticeable channeling of crunchy 90s indie rock, a la Velocity Girl and Versus. I found that the instrumental break leading to the solo (beginning at 2:21) epitomized the best of both worlds. The melodic nature of the buildup made me think there was going be some explosive grungy pinnacle. But again, I was taken by surprise. The actual payoff features carefully phrased notes bolstered by a Big Country bounce, while the initial the initial twee melody bubbles underneath.

Besides providing a dose of stylistic nostalgia, the band’s lyrical strength is demonstrated as well. In structure as well as delivery, the theme centers around finding that special mate who simply wants and recognizes what’s best for their partner. It is not only by way of providing affection, but allowing the other to be completely vulnerable. In doing so, they are rightfully worthy of trust. Though the nature of the lyrics seems brutal on the surface, it is possibly pertaining to the healthy challenges that will commence during the relationship. Each time “Let’s find a new way home” is sung, it marks another stage of growth that the two will take in stride and cherish continually. The mood is encapsulated by the last note song – positive and relaxed, as if having established harmony.

Overall, “Hold My Body” is a fully competent showcase of the band’s abilities. Their stylistic and lyrical content are equally exceptional, especially for a debut single. I appreciated how well the influences were implemented without having to be so boldly worn. If anything, I’m definitely interested in seeing how the single will translate in a potential album.

I come from a family who is passionate about all things music. I learned to sing at an early age, and by 13, had my very own Fender Strat guitar. I tried my hardest at learning all that I could. Because I was born with cerebral palsy, I had to teach myself an adaptive playing style. I learned to write and record my own music, despite these difficulties. In college, I started making great use of my writing abilities by reviewing music, as well as copy editing. I guess it's best to stick with what you know, while welcoming a fair challenge at the same time.
Previous Gallery: The Maine at Vans Warped Tour, Mansfield, MA 7/13/16
Next Vendetta – Pancakes and Breath mints