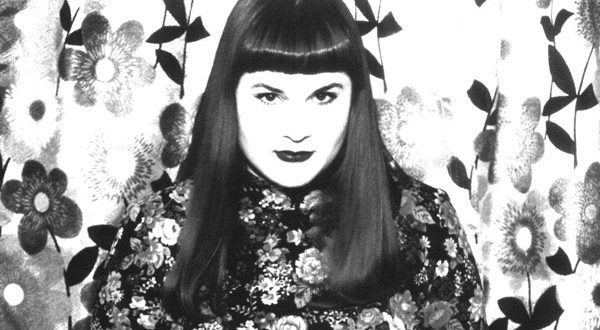 The power of Danielle French’s nine song collection Dark Love Songs lies in its chameleon like ability to reshape itself at will and redefine a host of familiar tropes. There is nothing new under the sun. However, French has chosen to search the shadows for something new and discovered a distinctive style pulling from an assortment of fields, but never settling for long into any sort of laziness. She is attentive throughout and has obviously fielded an impressive array of co-writers and players to help realize her musical vision. Dark Love Songs sounds surefooted throughout and that’s doubly memorable considering that the music displays such a restless hunger for new sounds and settings. The Canadian native concerns herself with affairs of the heart, as albums from new young artists invariably do, but the lyrical content on Dark Love Songs benefits from an intensely poetic quality that never risks overuse.

The poetry of in the album’s songs is surely a marriage of words and sound. “Last Goodbye” captures this perfectly with its blend of a well arranged sound collage meeting the cool, but deeply emotional, tone of French’s voice. There is such beautiful focus to the songs on this album and where that focus finds its ultimate expression is in how French’s composition time every development with compelling drama. The melodies in these songs develop at exactly the intended pacing and never arrive anywhere hastily. French goes into the blues some on the second song, “Take My Love”. It has all the hallmarks of an electrified blues – the steady groove, the flickering reverb treated guitar licks darting in and out of the mix, and a simmering vocal from French that noticeably raises the song’s intensity. “Did You Want Me?” brings a bit of attitude to the album and forsakes the ambient and post-modern blues trappings for a shot of outright rock. The drumming and overall rhythm section work on this track help push it over the top.

“Black Sunday” is definitely one of the album’s signature moments. French reaches a whole new level with her melodic involvement as she contrasts her understated, yet quite seductive vocal, against the sad strains of some beautiful violin playing. The violin carries the vast majority of the song’s melodic value, but French’s aforementioned understated contributions are an equally key component in its success. “Splinters” abandons the added instrumentation of the previous track and relies on its guitar work to succeed. The move is a well placed shift in pace and brings Dark Love Songs back around to an appealing folk music base. The final lyrically driven song on Dark Love Songs, “This is Why We Drink”, plays like an unexpectedly stunning summation of the album’s narrative and musical strengths. The jaded fatalism marking so many of the tracks finds absolute expression here thanks to the tone and subject matter. It ends French’s work on a resounding note and poses her for the future as one of the most interesting talents working today. Her fifth release is every bit as vibrant and daring as any since her 1995 debut.