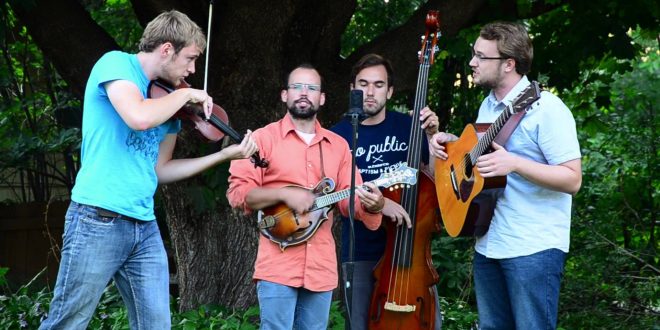 The Birtzer and Moravec brothers, Clint and Luke alongside Ethan and Jesse, have hit upon an unique and winning formula with their debut release One More Flight. This is Americana music that truly embodies the term. While the brothers often employ traditional instruments and faithfully recreate timeless bluegrass for a modern audience, their act extends far beyond mere homage. Instead, the collection encompasses the term “Americana” in its daring and successful blend of country, bluegrass, rock, and pop affectations. It results in a vibrant musical approach that feels elastic, clean, and unforced. The eleven songs on their debut deal with eternal subjects in popular song, looking back, lost love, the silliness of and misguided directions we take in life, and they flutter from the speakers with surprising effortlessness.

They start One More Flight off in stellar fashion with the clever “Another Cliché”. It might seem a little obvious, in retrospect, that there’s a curious sort of poetry present in our everyday speech, even at its most mundane, but true artists can snatch up that curious poetry and string it into fully formed musical narratives. “Country Road X” carries the same mantle forward, albeit in a much more understated fashion. The fact that the Sawtooth Brothers are able to wring out such finely tuned variations on traditional forms without ever relying on anything except traditional instrumentation and tasteful aesthetics marks them as standing among the genre’s most creative songwriters despite their comparatively brief visibility. “What’s Her Name?” takes One More Flight into much more deliberate, quasi-balladic territory. The sensitively rendered vocal is the song’s musical highlight and dramatizes the song’s lyrical narrative with stylishly sophisticated phrasing.

The fiddle and guitar attack on “On Top of the World” has light, acoustic rock flair. There’s little doubt that a handful of album’s songs, this one included, would make excellent rock songs with a bluesy flair. It’s never vocally strident, but tackles the lyrics with cool energy that never overreaches or strains for effect. One More Flight takes an amusingly comic turn with “Blame It”, but the humor has a light touch that never detracts from the substantive musical backdrop the Sawtooth Brothers set up for listeners. They explore some anthemic qualities on “Don’t Go It Alone”, but the positive lyrical message and mounting musical tension are never heavy handed, but uplifting instead. “I Should Be Going” is another darker, slightly more melancholic turn than much of the other material on One More Flight, but the Sawtooth Brothers prove once again that they are quite up to the task of essaying more serious material. The album’s title song is also its penultimate track. “One More Flight” is one of the album’s more ambitious lyrical moments, but the additional verbiage never weighs down another of their artful and airy musical arrangements. The Sawtooth Brothers are far from some novelty or pop country act – superior musicianship and composition guide this album every step of the way and ensure it is a full-on success.

Previous Previous Post
Next Gallery: Kaleo at The Duck Room at Blueberry Hill in St. Louis, MO on 7.19.16