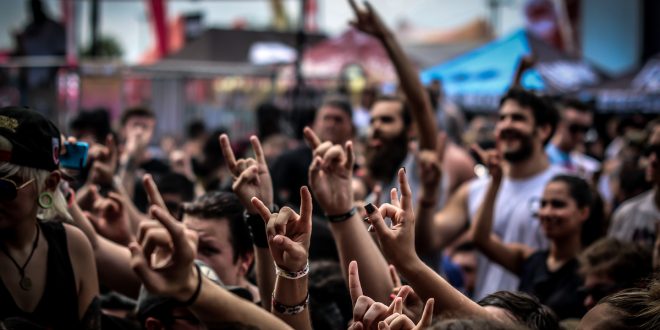 The musical circus rolled into town, also known as the 2016 Vans Warped Tour. My stop was in West Palm Beach, FL. They set up their musical rock-shop for the 4th of July weekend. From boob sweat to boot sweat; the day was long, hot, energized, and full of old veterans and new bands for fans to discover. Yet, this well-oiled touring musical machine was not as fine-tuned in some areas, which made some aspects seem tasteless. Over the past decade, the Vans Warped Tour has become a premier tour for bands to make a solid name for themselves among fans. Kellin Quinn, the lead singer from Sleeping with Sirens, echoed this sentiment on stage with his own past experiences as a fan attending previous Vans Warped Tour, “Where fans get the opportunity to be part of history, and witness the rising of new bands, and have the opportunity to get personal on an individual level with each member before hitting “rockstar’um.”

The fans brought their enthusiasm in equal stride. Arriving wearing banana suits, panda heads, body painting, caveman costumes; they raced across the festival to see as many bands as possible. As the heat seared our bodies while the bands poured down some awesome performances. They gave the crowd lots of energy to have angry mosh pits, lots of joy to dance with each other, and the energy to jump and scream (and even crowd surf over the pavement). The overall feeling of the day was excitement and fun, it was a constant whirlwind of music. With as long as this tour has been going on, the consensus among the bands has been that the tour is methodically planned out circus. For returning bands to the tour, such as Less Than Jake, it was more of a reunion with their friends and family. Over the years, the tour has evolved from the once punk/ska “type” of festival, to now hosting a wide range of musical styles. This year was no different, but out of all the bands I was able to witness, a few performers truly stood out to me on this patriotic weekend. Specifically ; Whitechapel, Waterparks, Tonight Alive, Teenage Bottlerocket, and most notably for me Vanna.

The Massachusetts-based heavy sounded band Vanna displayed a powerful and inspirational punch in the face for the fans. After delivering their short, but strong set, Davey Muise, the lead vocalist, jumped down from the stage stood on the security railing that separated the security guards and the crowd. He then began to deliver a powerful speech dedicated to the “freaks,” and to those who are “different” from everyone else.  Encouraging everyone to record his message with their phone, so they could watch it when people need a reminder, he conveyed what it meant to be like those fans who are constantly misunderstood by people. How he has found acceptance with those who share his same love and passion for music, and how it has helped him through the trials of his own life. Loudly expressing the importance of suicide is not the answer to their problems, and that life is too precious. As I stood there listening, my shirt doused in sweat and with the sun roasting me like a sirloin steak on the grill, his words sent goosebumps throughout my body. Then going over the rail into the crowd and blasting his vocal performance for their last song.

And now the part I didn’t like. Attention to the details is what makes a great show production for fans, regardless of the venue. This stop seemed to be lacking just that, detail. This amazing musical machine however, left some fans upset with me being one of them. The stage set up for the Journey “Left” and “Right” Foot stage was poor and a mess. Even though one band played on time right after the other on the same platform, there was no differentiation between the two sides of the platform stage. With no backdrop for any of the bands performing on the shared platform, each band played either next or in front of what ultimately looked like a hoarder’s garage. The disaster took away from some of the actual show. On top of which, some fans couldn’t even find the stage their band was playing on. You would think with years of experience, and planning that things like this wouldn’t happen, but it did. Seven stages in all were on site supporting the bands on tour, it felt like a maze to find them at first. One fan I spoke to was irritated because he missed half of Wage War’s performance while trying to find the stage. Part of this was due to the map and schedule. This stop charged fans two dollars each to obtain a cheap, barely readable, photocopied schedule of the day’s performances and stage location. The plain white paper printed with black ink product was finalized the day before at 11:58pm. It didn’t even last an hour in my pocket before being soaked through with my nasty body sweat making this already unreadable schedule even more useless than it initially was when I had to purchase it. Anyone who has attended another festival like this can attest that a prepared schedule is completed and no payment is ever had to be made to obtain it. For me, it took away from the sheer embodiment of what the tour and the music culture is all about.

At the end of the hot, humid, and shirt soaked long day, people left the Perfect Vodka Amphitheatre with a smile and ringing ears. Whether it was hearing, seeing, meeting, and discovering a new or returning band, or a combination of both, the Vans Warped Tour always makes for a great concert day. And just like Less Than Jake said, “Until next year, Catch ya’ later Bill and Ted!”

Here are a few images from the show. 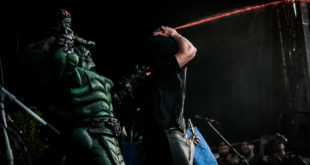 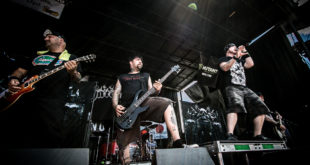 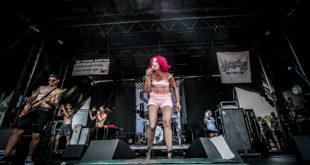