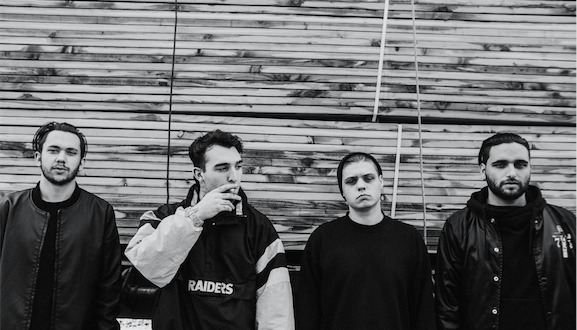 Cane Hill, a ferocious, unforgiving nu-metal group reigning from New Orleans, first emerged on the scene back in 2013. In a mere three years, the band has gone on tour with various musicians, such as Hollywood Undead and Bullet for My Valentine, as well as released a self-titled EP in 2015. Now, on July 15th, Cane Hill is releasing their full length album Smile on Rise Records.

Smile consists of 10 tracks, and although some tracks in the album seem similar, bordering on repetitive, the album in its entirety is unique and unlike other music currently circulating in the nu-metal atmosphere. Elijah Witt, vocalist, has a unique set of vocals, and when combined with the heavy, dark instrumentals the combination results in an organized, chaotic chemical reaction that is Smile. Some fans may even find certain songs familiar, such as “Screwtape.” An early version of “Screwtape” was released on Cane Hill’s self-titled EP, but it is nothing compared to its revamp. With varied vocals and different instruments, the 2016 version is definitely better produced and syncs with the rest of the album extremely well.

Throughout Smile, listeners can definitely pick up on apparent musical influences. In certain songs, such as “St. Veronica,” Cane Hill channels their twisted sound and narrative in a manner similar to Korn circa their “Coming Undone” era.

Although each track in Smile has its strong points, truly the song that should be highlighted is “Strange Candy.” Placed as the last song, the track serves as an excellent finale. Immediately, within seconds, “Strange Candy” sounds completely different from the rest of the album, which at first might deter some listeners, but the difference is definitely not a negative aspect. The stark difference is due to Witt’s varied vocals, which are explored in the track, and the extremely talented instruments that join in, especially the guitar. Again, apparent Korn and other 90’s nu-metal band musical influences, such as Disturbed, are present in this track.

Overall, Smile is definitely an album to purchase, and listen to again and again. Cane Hill has arrived and are determined to violently shake up the music industry.