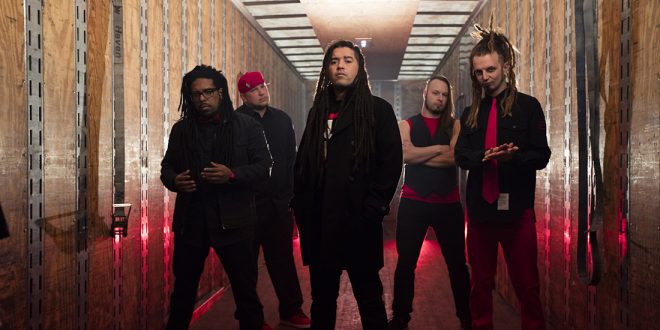 Nonpoint is ready to take the world by storm with their ninth studio release, The Poison Red. Released on Spinefarm Records, the record showcases the stamina, massive power and undeniable musicianship that Nonpoint has to offer. The Fort Lauderdale based band is assembled of Elias Soriano (vocals), Robb Rivera (drums), Rasheed Thomas (rhythm guitar), Adam Woloszyn (bass) and B.C. Kochmit (guitar).

The Poison Red kicks off with its first radio single, “Generation Idiot”. This will hit you instantly and take you right back to the common core that Nonpoint has always been known to be. Elias Soriano’s voice is better than ever and couldn’t be more on point. It’s a great way to kick off the album and leaves you instantly wanting more. It’s not hard to see why this track is the first single.

Soriano explains that he is trying to empower people and make them the best that they can possibly be.

Every song on this album will have you instantly hooked and that continues with “No Running Allowed”. Normally bands try to pack in all of the best songs within the first few tracks of an album. However, with Nonpoint that is definitely not the case. “No Running Allowed” is the eleventh track of the disc and it emerges as one of the best tracks on the CD.

When trying to think of another band that is on the same caliber as Nonpoint, one doesn’t come to mind. Nonpoint is a unique mix of aggressive rock, metal and traces of modern day rapcore.

“Not everybody wants to go see a shrink and not everybody wants to sit around and wallow,” Soriano observes. “Our music can be therapy. It is what helps someone get through something. I attest all of our success to keeping three things important: the music, the show, and the fans.”

Pick up a copy of Nonpoint’s newest album The Poison Red today. It’s available in music stores everywhere, along with iTunes and Amazon. You will not be disappointed and it will be on my playlist for months to come. Nonpoint fans, the long awaited studio album you’ve always wanted is finally here.

Resident Music and Photography addict from Northern, New Jersey.. USA. Got into both music and photography at a young age.. it's been history since!
@billtnj
Previous Cardigan Records Sign Lazarus Wilde
Next Introducing Jon Ian Clarke ‘Aka The Genie’