Home / Interview / Interview: Salt Ashes – The Brighton based singer-songwriter speaks to us about her upcoming album Save It, her influences, and much more. 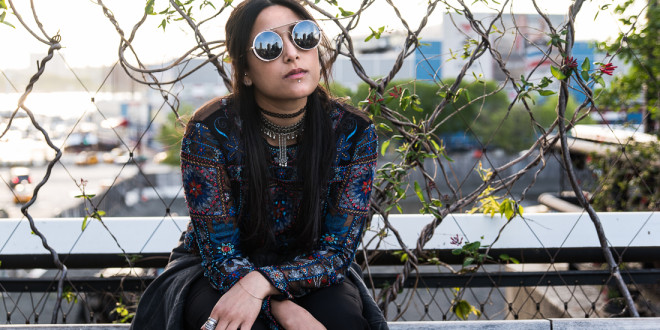 Interview: Salt Ashes – The Brighton based singer-songwriter speaks to us about her upcoming album Save It, her influences, and much more.

Amidst the setting sun and the rushing flow of passersby in New York City’s High Line park, Music Existence had the opportunity to sit down and catch up with Brighton based electronica vocalist Salt Ashes. Her music has catchy choruses and entrancing dance rhythms that are sure to get you on your feet and strut your stuff. Salt Ashes, honest as her lyrics, lays it all out for us. We got to know how she creates her music, the most difficult aspect of being a vocalist, and how she overcomes writer’s block amongst many other things.

ME: First and foremost congratulations on your latest single and on the upcoming release of your album, I’m really excited about it.

ME: From what I read, the full length will be released in July?

SA: This is true.

ME: Which tracks are you most excited to perform?

SA: ‘Whatever You Want Me to Be’, which is one of the slower numbers on the album. It’s definitely one of my favorite ones to perform so I’m excited to be able to do that one.

ME: What was the thought process behind your single ‘Save It’?

SA: I co-wrote it with a guy named Rob Irving from House of Esmeralds. It was spread over a couple of sessions. But it was one of those songs that we just started with a melody and I mumbled a few lyrics and we kind of pieced it together, then we decided what it was about. So it wasn’t one of those moments “let’s write about this” it was like “this is what my words are creating” so we continued on like that.

ME: When it flows effortlessly like that is when it’s most natural.

ME: What was the most difficult aspect of putting your album together?

SA: Um, I think being a perfectionist, that hinders me quite a lot.

SA: (Laughs) Yeah yeah, genuinely. Because sometimes I feel like a song isn’t good enough. So sometimes I won’t complete it, because I think “Oh no, scrap that” and start all over again. Where if I actually would just stop, finish the song, most of the time it turns out to be alright. Or some don’t.

ME: With the songs you scrap, do they get completely deleted or are they saved for later on?

SA:  Yeah, they’re always there and then sometimes I’ll just go back and listen to everything and go, “Oh! That was quite good actually. When did I write that?!” And then I’ll pick it up again and finish it that way. But yeah, I think definitely, just my own kind of head is probably the most difficult thing to get over in doing this album (laughs).

ME: Did you experience any writer’s block, and if so, how did you overcome it?

SA: Yeah! Massively. Most new artists say this was kind of like a life long work, my debut album, because you spend your whole life writing. Then you release that, your first album. There was about six months I would say that there was something quite big happening in my life. After that it was like I don’t want to express any feelings right now. So the way that I got over it was just to keep trying. At one moment I told myself, “Ok, just stop trying because you’re actually hurting yourself.” Stop trying, read some books, watch some movies. Do things that inspire you, go and see some dance shows, things like that. Then slowly I felt that I was ready.

ME: Kind of like putting it on the back burner.

SA: Yes, because I felt like I was putting too much pressure on myself. Too much pressure, so I’m just gonna mentally give myself some space and just go and watch some gigs. Be inspired again. And then gradually, I found whatever it was, that switch inside of me, “Hey I wanna write now!”

ME: If you had to choose three tracks, new or old to introduce someone to your music, which would they be and why?

SA: It would definitely be ‘Save It’, the new single, obvious (laughs). ‘Whatever You Want Me to Be’ and then probably a track called ‘Wilderness’, which is like track three on the album, I think. I think that those three kind of sum up the general sound of the album.

ME: When coming up with ideas for your music videos, do you find it difficult to express your ideas in the thought process for them? As in being a character within the video but also the reason for the video?

SA: I’ve never thought of that actually. That’s a really good question, I don’t know really. I just kind of roll with it. The way that I perform in the video, is a similar way to how I perform on stage so that’s one thing. Then, the way that I perform in the videos would be just however the song makes me feel in that moment and obviously I have great directors. But I’m quite happy that all the videos I’ve released have stemmed from my original ideas anyways, that’s why I think that I felt comfortable. Then the directors come on board, collaborate, and made the magic basically.

ME: Have you ever felt that your musical style has evolved from when you first started writing music?

SA: Oh my God, massively! When I first started writing, it was originally ballads. Then it transformed into pop-rock, ‘cause I was like “Yeah, I totally want to be like a female Foo Fighters.” When really it kind of turned out to be a Kelly Clarkson (laughs).

ME: (Laughing) That would have been an interesting tour, “We are Foo Fighter Clarkson!”

SA: Yeah! It’s like we were aiming for Foo Fighters but, what really came out was Kelly Clarkson. Which isn’t a bad thing, you know, I respect her totally. It’s just kind of what happened. And then when I was performing with that band, it just really wasn’t me at all. Vocally it wasn’t me. So I took a year out of performing and just wrote and wrote and wrote, rediscovered my voice, rediscovered my style of writing. In my head it was a fairly long process. Gradually I got here and discovered the sound that I really loved.

ME: The arc of the journey is always interesting because you don’t always start where you want to end up. You are constantly changing and evolving.

SA: Yeah. I got such an eclectic taste of music and I used to like singing to all different things and using my voice to the maximum, as high and as low as I could go. So I think with that it was kind of hard to know where to place my genre. What was really me.

ME: You can’t always pin something specific to everything. Sometimes it is or it isn’t and you go from there.

ME: Who would you like to collaborate with and why?

SA: I would love to collaborate with Todd Terje. There’s a new DJ called SG Lewis, he’s been doing a lot of chill, soulful, deep mellow house, which is really cool, and Grimes.

ME: (I took notice that she looked rather pensive as if to want to add more.)

ME: What do you look forward to the most after the release of your album?

ME: How do you deal with that uncertainty?

SA: It’s difficult. It’s really difficult. I think I’ve gotten to the point now I don’t expect too much. I don’t get too excited. I am very excited that the album is coming out, but I don’t get so excited so that if something doesn’t accumulate I’m not going to be completely devastated. I’m just really happy to have the album out now after such a long time. When you spend your life writing you kind of build up to this moment. So this is like a big moment. If people don’t like it, then I’ll just have to move on. Keep writing. That’s just how I deal with it. Just put it out there, see if people like it and I’m fully expecting that not all will like it. Either way, because I know music is subjective. I’ve had so many friends who I believed to have written incredible records and it didn’t take. People didn’t like it, for some reason it didn’t work and that’s fine. They’ve moved on, still doing music obviously, different project.

ME: Who were your music influences and who do you listen to on your down time?

SA: Giorgio Moroder definite big influence on the whole disco side, Daft Punk, Bjork, Sigur Ros. I’ve got quite a big range of genres and people I listen to. At the time I’m listening to a lot of Ne-Yo, MØ, Todd Terje, Eskimo Twins, I like FKA Twigs, I’m kind of interested in what she does next.

ME: What are the biggest challenges as a vocalist?

SA: (With intense laughter at various points, she replies) The biggest challenge of being a vocalist is not always being able to go out and get pissed! [British slang for drunk]. If you’ve got something on the next day or if you’re gigging that night, I’m not the kind of singer that can drink and sound great and I like to party sometimes! Not all the time, but sometimes. It’s difficult because you know you wanna have a little drink before you hit the stage and sometimes it’s fine but there’s those times when your throat’s really dry (makes a slight hacking sound) and then you’re like “Great! I fucked it! Now what?” Sometimes not being able to be as free as you’d like to be. That’s kind of it, not so deep! I’m sure you wanted a deeper answer!

ME: Last but not least, any shoutouts? Mom, dad, whomever! Call them out.

SA: I guess, if I don’t give a shoutout to my mom now, I’m gonna get in big trouble right?! (Giggles) Hey mom. To everyone who’s been supportive of the music so far, it’s a genuine love for them.

To get more up to date information on Salt Ashes visit the links below:

Concert lover, music fanatic. If it sounds good to me, the rest doesn't matter.
@njaziaddict
Previous Dashius Clay – Grindin (Music Video)
Next Gallery: The Neighbourhood at The Pageant in St. Louis, MO on 6.1.16