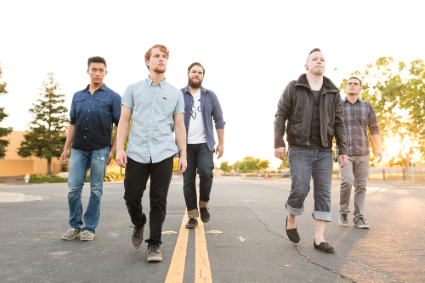 Alternative rock band, Surviving the Era breathes beautiful imagery into their music with their sophomore EP release, Parallax. Slated for release at Sacramento’s First Festival on June 18th, this collection of five songs tugs at the heartstrings with powerful lyrics and thrilling melodies.

The independent five-piece band out of Sacramento is made up of Ryan Sollom (vocals), Kyle Newton (guitar), Kevin Cortez (guitar), Seth Borges (bass/vocals), and Jake Cooley (drums). Surviving the Era hit the scene at a time when music across the board seemed to lack individuality. Inspired by everything from early punk rock to the Top 40’s, they strive to make the music they love, which is something I feel only an independent band can do in the modern music industry. Since their debut performance in November 2014, Surviving the Era has played numerous shows in support of acts such as Emery, He Is Legend, Oleander, and They Went Ghost.

“Queen of the Sea” opens up Parallax, and I’m immediately struck by the very Anberlin feel of the band, mixed with some Alexisonfire vibes as well. I’m always moved by songs relating to the ocean, and this one is no different. The deep emotive lyrics, fueled by the frantic guitars and deep bass riffs, easily portray the desperation of needing to be rescued from drowning in despair.

The overall mood changes in “Here In the Dark,” with the guitarists playing in a different key, and initially making the song seem more upbeat and light-hearted. The lyrics however go just as deep and dark as “Queen of the Sea.” With lines like “This time I won’t let go / even if the search lights stop their glow,” this track helps me get a sense of struggle from the juxtaposition, like I’m laid bare across the beach, powerless against the waves.

Crunchy guitars kick off “City Church,” and the band seems to erupt and come into a beautiful whole during the chorus. With their wonderful harmonies, Surviving the Era’s music continues to play out like a short film in my head, this song playing like a one-sided love story beneath the glow of city lights.

“Give It Up” is an incredibly empowering track that starts off with thunderous drums before falling away to the first verse. The hope in the lyrics is lifted higher by the dramatic swells of the melody, and the push to keep going is fueled by drums that pound like a heartbeat.

Showcasing their punk inspiration, Surviving the Era kicks off “Maps” with some truly in-your-face licks. The raw energy in this song, combined with the strong poetry and symbolism in the lyrics, gives me some wonderful AFI nostalgia.

As the Parallax EP came to a close and began to repeat, I was struck with the realization that I’d become so invested in Surviving the Era that I was desperate to hear more. Luckily, their self-titled debut EP is available through their website, on Soundcloud, and on Spotify. While I add these guys to my music collection and (impatiently) await the release of Parallax, I’m keeping an eye on them in 2016 and crossing my fingers for a full album to come in the near future.