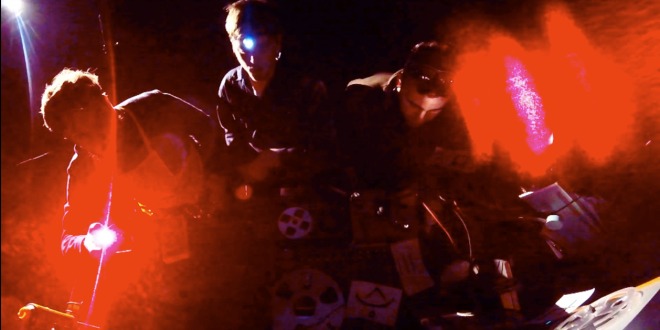 Album Review: Maths and the Moon – Familiar Strange (Out May 20)

Maths and the Moon continue to hone a stylistic ambiguity that fills myriad alternative fans with joy. Over half a decade in existence, their style is rooted in a mass of crunchy, space-wide psychedelia, all the while kept inventive and free from stringent interpretation. Night Train Daydream, the Southampton trio’s 2013 debut, flirted with shifty post-punk percussion, hazy shoegaze textures and wittily blunt lyricisms. But three years on, the band undergoes an even bigger stylistic transformation for their follow-up, Familiar Strange.

Much like the previous album, the presentation is carefully constructed and emits an unmistakable 90s atmosphere. This time around, however, its riffs are simpler with a more direct approach, for the most part. Front man Andy Fielder also reinvents his vocal tone. Rather than instantly command attention in a bold, experimental vein, it is smoother and subdued, competently blending against clean and overdriven guitars. Considering such qualities, it’s as if the band had reversed integration of these elements, much like a mirror flipping to the opposite side. There’s a strong grunge influence on the opener, “The Futurist”, its lone four-chord progression actually packing in a great deal of substance. I began envisioning the subject of the song constricted by their own anxieties, longing to break free and re-establish contact with the outside world. What made the song stand out as an opener, for the most part, was in featuring a progressive build for each verse, eventually hitting a single mesmerizing chorus. I’d like to think its statement, “Keep on dreaming/Keep on flying,” is the ultimate message that constitutes pushing forward, rather than remaining disillusioned a state of limbo. Up next is “Magic,” a killer up-tempo rocker also utilizing the soft verse, loud chorus dynamic. The guitar and bass tones have a real Nevermind-era Nirvana feel to them, and the vocals still add plenty of identity to the song. Already the band has mastered the art of simple and pure presentation carrying contrasting complex themes. What I gathered from the song’s verses was that situations, regardless how they are presented on the surface, may still produce unpredictable outcomes. The first verse explains how a lack of visible boundary (‘smoke in mirrors,’ in the song’s case) doesn’t always guarantee an easy escape. The second and third verses also prove effective, emphasizing deterring situations are not solely the result of unforeseen circumstances, but of decision. One may lose focus if under the assumption that seeking reward (‘gold and silver’) signifies that they are on the right track. Further, an attempted strike (the dagger, described as black and crooked) should be ignored rather than confronted, for drawing attention to it causes another detour to occur (‘shadows follow me’). “Amongst the Trees,” one of the album’s longer cuts expounds on the story, with the instrumentation bringing out the visual aspect of the song title. It is bass-driven in its guitar and percussion, emphasizing patience through a long, dream- inducing trek. The lyrics express the hope that some semblance of other civilian activity, perhaps a fellow traveler in an off-highway vehicle, will soon help him find his way home. Through the lyrics it is revealed that the man initially wanted to live a simple life away from reality, but had since grown fearful. In order to find his way out, he must re-familiarize himself with his surroundings by relying solely on trial and error. The song changes tone about halfway into the song, with greater emphasis on melodic layering, and eventually building to a lead melody coated in walls of reverb. This is where the band’s psychedelic elements kick in; playing like all life on this dream is ascending by its lack of structure of gravitational pull.

While “Howling” solidifies the album’s side of catchy pop-driven tunes, “In the Ellipse” is where the vibe gravitates more toward experimental. I appreciated its low key acoustic register, as well as its shifting in a post-punk direction. The construction of the song resembles an expansion of the journey, where the man’s state of mind grows restless, yet keeps a determined composure. The percussion and bass act as his pulse, as the wet droplets of reverb guitar do his perspiration. The dynamics of the songs also interchange as additional compacted lead melodies have both a back and foreground presence. Interestingly, this style alludes back to the elements of Daydream, while still emphasizing the newer grunge influences—almost like the man is finding his way around. By far the heaviest and darkest track is “Boomerang,” featuring a foundation of bent heavy riffs and visualizations of false security, subtle traps and growing fatigue. The band sets the second half of the song up perfectly, with a single reverberating string finding harmony on every chord change. This aesthetic and concept is integrated once again on “The Crow Flies,” but its execution is much more expansive and generally better all around. The final track “Psych-Seeing,” is akin to Loveless-era My Bloody Valentine, with its bass element being the driving force against the prominent shoegazing reverberation. Similarly, the interplay between the vocals and guitars is presented in a very Kevin Shields manner. It is constant and breathable, somehow not giving off the feeling of loss or constraint—just a heart that continues to beat on through illusory sights and signs until familiar ground is reached.

Overall, Familiar Strange has left me with a kind of surprise that might as well remain forever understated. The decision to nearly completely shift styles not only left me in shock, but genuinely impressed. A deeper listen each time reminded me that reminded me that Maths and the Moon venture beyond the nostalgia of grunge. More important, they reinvigorate a tenacious sense of sincerity and authenticity that is seldom heard in rock music today.

Maths and the Moon Socials: Facebook|Youtube|Twitter

I come from a family who is passionate about all things music. I learned to sing at an early age, and by 13, had my very own Fender Strat guitar. I tried my hardest at learning all that I could. Because I was born with cerebral palsy, I had to teach myself an adaptive playing style. I learned to write and record my own music, despite these difficulties. In college, I started making great use of my writing abilities by reviewing music, as well as copy editing. I guess it's best to stick with what you know, while welcoming a fair challenge at the same time.
Previous Gallery: The Brian Jonestown Massacre at Webster Hall, NYC ,5/9/2016
Next Gallery: Moderat at Webster Hall, NYC, 5.19.16