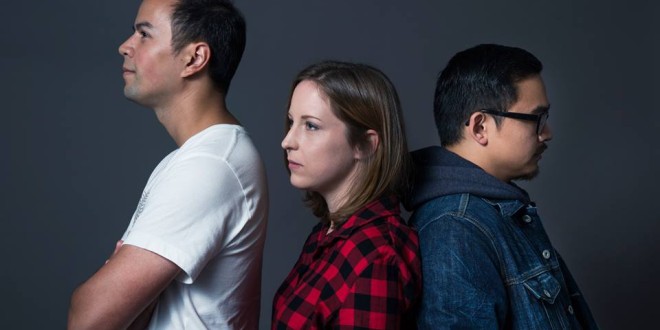 Phosphene, headed by vocalist Rachel Frankel, have released their EP Breaker, a five song package that is sure to sweep listeners off of their feet from note one.

The first track “Be Mine” is a dreampop dream, effortlessly ethereal thanks to the soothing and magical vocal performance by Frankel. It has a steady backbeat that drives the song, but the melody itself is the star here, calming and breezy even if the content isn’t. “You won’t be mine to pull apart,” Frankel sings repeatedly and though her voice is angelic in its tone, it’s easy to feel her pain. With an electric guitar as a backdrop, crashing and thrashing, it makes the tune more dynamic and one, if not the best track on the entire EP.

“Silver” has a bit of a 90s vibe in its alternative electric guitar style instrumentation, but still retains the lo fi sound the band is known for. The layering of Frankel’s voice on top of one another separates this song from others on the EP and shows that the band isn’t afraid to experiment a bit. It is reminiscent of something Best Coast or duo Tennis would release, putting Phosphene in good company, but it never feels derivative. When Frankel moans gloriously “let’s start spinning til the sky booms” one can’t help but be in complete swoonworthy mode sailing along with her.

The first true ballad is “Hear Me Out” and is much simpler in its instrumentation than what listeners have previously heard on the album. This stripped down approach lets the already incredible Frankel shine even more as most of the concentration is put on her voice. The lyrics on this particular track are extremely visual: “you drape the cold night/oh I feel the ice beneath us” Frankel tells her listeners who can easily see the picture she is trying to and successfully paint helping it to stand out as one of the most memorable tunes on Breaker.

“Rogue” starts off with the other members of the band singing before Frankel takes over. It’s an incredibly jarring and welcome change and one has to wonder why they are only featured on one song as their vocals really fit in with the dreampop landscape that the band has set up. But Frankel has already proven that she is more than capable of being a compelling lead vocalist. Here, she channels a bit of the lead singer of The Pipettes, while still retaining her own voice. As with all of the tracks on the album, unless you have the lyrics in front of you, they are hard to decipher. But it really doesn’t matter because the execution and production behind every song is so well done that listeners can still enjoy the tunes even if they don’t know what Frankel is exactly singing about.

The album closes with “Ride” another track that combines lyrical artistry with Frankel’s serene voice. “You swing/heavy arms/your sea is everywhere/carries through melody” is just some of the powerful imagery that Phosphene brings to the table on this particular song, connecting it with other visual tracks on the EP making Breaker a complete cohesive work of art and one that is not to be missed.

Heartbreaking and heavenly with vibrant lyrics and relaxing vocals from Frankel, Breaker is the perfect EP you need for relaxing by the pool on a summer day.