Home / News / Tour / Slayer, Bullet for my Valentine and Unearth in Bratislava 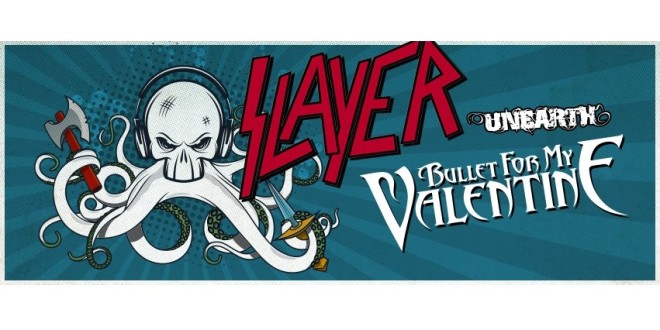 Slayer, Bullet for my Valentine and Unearth in Bratislava

Slayer, Bullet for my Valentine and Unearth will perform together in Bratislava! These three bands will meet on 17th of August in Aegon Arena on one stage exclusively by Octopus promotion.

Thrash-metal legend Slayer is returning to Bratislava to celebrate 35 years on the scene and to present their new album Repentless. Two singles had already have huge success among the fans with their interesting official videos – Repentless and You against you.

Slovak fans can already look forward also for the Bullet for my Valentine show. This band from Wales has never played show in Slovakia before, despite few prior announcements. One of the most respected metalcore bands is internationally successful mostly for their amazing energetic live performances. Their most known hits, which surely will appear in this show’s setlist, include Tears Don’t Fall, Your Betrayal or All These Things I Hate.

Third band is American Unearth. Quartet from Massachusetts is reputable representant of metalcore from US. They have already six studio albums on their record and they have toured all over the world. They claim their influences and idols to be legends like Slayer, Iron Maiden or Metallica. They will appear with one of them on one stage this summer in Bratislava.

Tickets will go on sale tomorrow, 11th May 2016 on Ticketportal.