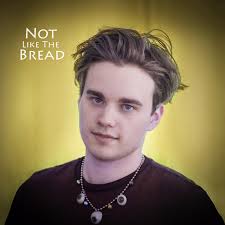 Ry Mohon is a solo musician currently based in Boston. This debut effort, released April 15th, is composed of rerecorded songs that Mohon wrote between the ages of twelve and seventeen while growing up in his hometown of Santa Fe, New Mexico. A past student at Berklee College of music, Mohon decided to take a hiatus from academic work in order to produce this collection of tracks. “Not Like the Bread” is the first of a three concept album run based on Mohon’s early works. The remaining two albums are expected to come out this year as well.

This album is pretty ballsy. Not only is it refreshing, creative, and adamantly non-linear, it takes musical risks and implements interesting modes of expression and lyrical content. The first thing that stands out is the song structures; these tracks are anything but typical, and the traditional verse, chorus, verse model is almost completely absent. Most of the songs, like the first aptly titled “Opener”, seem to drift between various moods and themes that eventually resolve into a coherent musical idea. Tracks on this album can vary drastically within a four minute time span; incorporating instrumentation that ranges from dry acoustic guitar, to lo-fi drums, to rich synths and pads, and just about everything in between. “Not Like The Bread” is an eclectic and wild barrage of raw musical direction, yet still carries with it a sense of unity that allows listeners to be able to follow along and connect with the tracks. At heart, the tendencies of this album appear to be very alternative/rock based, and carry a sound that is vaguely similar to The White Stripes; in that some of the guitars sound like they were bashed against a cement floor a couple of times before being plugged into a broken amp in which every setting was haphazardly cranked to ten as a crazy man slings a frenzy of cryptic broken sentences through a microphone. It’s somewhat confusing and strange, but also really cool and inspiring. Even when this album has its more polished moments, there is still a certain brand of wildness to it that makes it seem so unique. Mohon’s voice is good. It’s as simple as that. His vocal style fits the raw and unpredictable nature of the music perfectly. The vocals are bright, full, and have a way of piercing through the mix, even when a vast array of craziness is going on around them.

“Not Like The Bread” sits between a few different sounds. The garage-based, alternative, bashed guitar, dry acoustic element to this album in many ways is superior to the more synth based content that can be found on a few of the tracks. In short, the usage of synths, strange effects, and other various novelties seems to detract from the content at times and can clutter up the mix. For example, one of the best tracks on this album is “New Recording 37”. Mohon’s voice really comes through given the acoustic driven chord progression and the lyrics are top-notch. That entire song could have been stripped to just the guitar, the voice, and maybe a single percussive element, as many of the songs could have. While it is understandable that Mohon is attempting to craft a theme for these tracks that is enveloped in a whirlwind of sound, it can be disappointing when additions such as these take away from the true vocal talents this musician has. Mohon’s voice should always be center stage because it is good. Listeners may conclude the album wishing that the artist leaned more on his natural talents as opposed to synths and other various effects.

This album is as multi-dimensional as it is unique. It is excellent to witness a young musician like Ry Mohon create music that doesn’t bend to popular expectations. There is nothing
manufactured about this music, it is genuine, complex, and will leave listeners with a perspective that is entirely new and fresh. “Not Like The Bread” is an experience. It is a fantastic debut album from a talented musician that should be respected for writing and presenting material that doesn’t conform to what everyone expects alternative music to be.