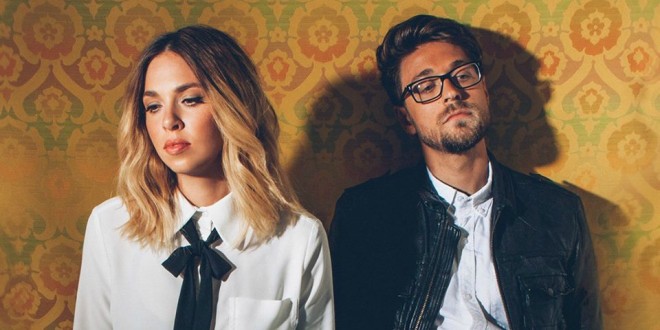 Not since the disbanding of The Civil Wars has a male and female duo captured this reviewers attention and heart like The Saint Johns, made up of Louis Johnson and Jordan Meredith. Their debut LP Dead of Night is full of lush ballads as well as more alternative/pop tunes that are reminiscent of John Paul White and Joy Williams sound, but also serve up their own brand of peppiness.

The clear radio friendly, and most catchy track, is “Lost The Feeling” which takes some cues from Fleetwood Mac, and has a complete retro vibe. Right when the electric guitars kick in, listeners are in for a treat. Johnson and Meredith sing together, perfectly complimenting each other, and completely getting into the groove of the tune. The lyrics are sassy and in a way are similar to Lady Antebellum’s “Need You Now,” in terms of harmonizations and pure emotion, but is in direct contrast when it comes to the content. “Bet you’re gonna call me up/stirring up the dust of an old time feeling,” the duo croons, but on the chorus it is clear that the former love is not someone to run back to, in fact the person in question doesn’t seem to get the hint that they are not wanted as Johnson and Meredith sing “I said it before but you’re still not hearing/I lost the feeling.” Despite it being a kiss off song, it has such an infectious beat that it impossible not to sing along with a smile on ones face.

While there are plenty of other worthy, slightly more pop songs on the album, where The Saint Johns really shine are on The Civil Wars style ballads that draw out the best vocal performances.

“They Way You Did” is a quiet ballad that is gentle while still holding a commanding narrative. The lyrics themselves are pure poetry as Johnson and Meredith sing “to lay beneath the stars and skies we built together/but I’m afraid it’s lost forever” revealing their fears and showcasing the beauty and pain of love. It’s the type of song that builds up slowly over time, docile until all the feelings culminate and erupt like a volcano at the climax of the tune. Like a perfect novel, The Saint Johns know how to pace out an emotional and relatable story in just a few minutes, carrying listeners on a ride that is sure to strike a few chords in their hearts.

One of the absolute highlights of Dead of Night is “Faded Love” which appears near the end of the album. It starts off with Johnson singing on his own and then Meredith joining him shortly after. This is one of those songs that is instantly a classic and showcases just how well the duo’s voices blend together while each still retaining their own vocal identity. Yes, this is one of the tracks that sound as if The Civil Wars could have made it famous first with its lush production and haunting lyrics and melody, but all credit goes to the powerhouse that are The Saint Johns. It’s hypnotic and dark and swells at just the right times, allowing the song, once again, to build up to a powerful climax where the duo sing never more strongly about “the warning signs” and how “after light comes the dark/and the world just moves along like there’s nothing going wrong.” They continue on that “fading love leaves a mark” and by making this track dynamic and compelling the song itself is sure to leave its own mark on listeners.

Tied with “Faded Love” for best track on the LP is the very first song “Shadowplay.” The lyrics are some of the most relatable words to be written by the duo as they admit “I bet you think you’re alone in all your doubt/when you’re sitting at home just waiting on someone to find you/but no one ever comes around.” It’s this type of imagery that The Saint Johns really excel at and help to bring their stories to life. Pushing and pulling at listeners hearts at just the right moments, The Saint Johns know how to get to the emotional essence of a beautifully crafted tune. The chorus is downright chill inducing in the best way possible, delicate and vulnerable and undeniably moving. If the Civil Wars were still together, this is the type of sound I would expect to hear from them, and that is nothing but a huge compliment to The Saint Johns.

Dead of Night is nearly flawless but there are one or two missteps along the way. “Caught Me Dying” is a perfectly adequate song, and Johnson and Meredith deliver yet another pitch perfect performance, but it doesn’t quite have the same hook or emotional stake that so many of their other tunes have. The melody is a bit forgettable and gets lost, buried under more superior tracks. Surprisingly the title track is just ok as there is nothing about it that stands out. It is not bad by any means, but The Saint Johns are capable of much more, and because of the gems that the duo have presented elsewhere on the album, “Dead of Night” is disappointing.

But make no mistake about it, the album is not just simply good, it is the best LP release of 2016 thus far. The Saint Johns have crafted an emotional album that shows that this duo is here to stay, and makes one look forward to their future work. In the meantime soak in Dead of Night and get lost in the music.