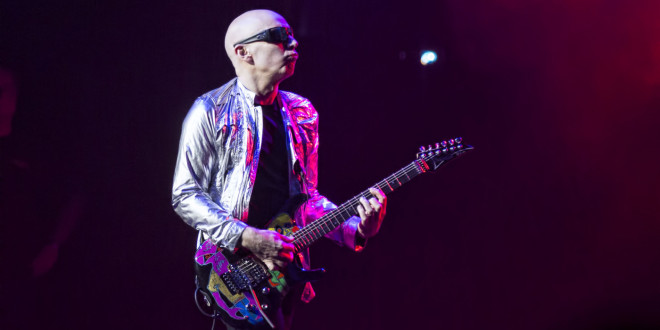 Review: Joe Satriani at The Chicago Theatre in Chicago, IL 04/15/16

Joe Satriani brought his From Surfing To Shockwave: Mind-Bending Guitar Dare Devilry tour to the iconic Chicago Theatre on Friday night for a night of guitar excellence.

It is astounding to think that someone as talented as Joe Satriani didn’t manage to sell out The Chicago Theatre, but this did not put a dampener on proceedings. The theatre was filled with men and women of all ages, including those who couldn’t contain the excitment and took to their feet to air-guitar along with the maestro himself.

The word virtuoso doesn’t quite cut it when describing Satriani. This is a talented musician who has clearly broken the mould. You don’t need a singer when you have someone who can express his voice and every emotion through the guitar like this. It truly was as if the guitar was a part of him – something that is often said, but has never been more appropriately used than when describing Satriani.

The night consisted of two sets, which spanned his 30-year career. Mind you, looking at him, it’s hard to imagine that he is going to be 60 years old this summer.

It must be intimidating being a musician and stepping up onto the stage with someone who oozes talent from every pore like Satriani does, but the band he had accompanying him were every bit as talented. You would have to be! Mike Keneally more than held his own when it came to playing guitar alongside this iconic great. It’s a rare sight seeing two guitarists so perfectly in tune with each other, something that the audience also appreciated looking at the standing ovation they gave after watching Keneally and Satriani in perfect harmony on the stage. Whilst the guitars played such a major part to the evening’s festivities, it would be unfair not to also mention the strong rhythm section they had alongside them – Marco Minnemann on the drums, and Bryan Beller on bass.  Four of the best musicians you will see out there, up on one stage together.

Whilst it may feel strange for some to think of a band without a singer, it is often the guitar solo that gets the crowd going crazy. Here, you didn’t have to wait for that part. The way Satriani manages to get his collection of guitars to sing, you often don’t realize the absence of a vocalist.

With only a handful of dates left on this tour, which encompasses Canada and the West Coast, be sure to check it out if they come to your town. It’s always great to get to see something different to the norm, and this is one of those shows that is definitely different for the better.

Check out our photos of the show here.

Kirstine moved from the UK to Chicago in 2011 and has fallen in love with the city and its music scene. She enjoys combining her two biggest passions – music and photography. If there is a band with a guitar playing, chances are she’ll be there…camera in hand. Kirstine went to her first live concert at 7 years old and hasn’t looked back since!
@k_walton79
Previous MiltonJ and The Leftovers – ‘Vain Wisdom’ LP & “Sun” Lyric Video
Next Gallery: Joe Satriani at The Chicago Theatre in Chicago, IL 04/15/16