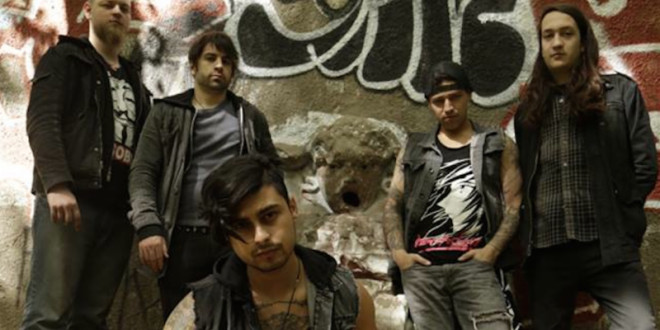 From vast experience and the need to share their story comes As Days Fade – a metal quintet from Queens that thrives on melodic riffs and a drive to defy expectation. The group has garnered a legion of followers through previous releases and a live show full of urgency that attracts both newcomers and long-time fans of the genre. After refocusing and setting their goals, As Days Fade are set to take on the scene and further showcase what they’re capable of with a brand new EP, titled Resurrection, set for release on June 3rd. According to the band, this Resurrection EP is crucial in their next step towards sonic revolution:

This release is titled ‘Resurrection’ because it’s the band’s awakening after a year or so hiatus from losing our old drummer. Him quitting the band was a shock to us. Some of these songs on this release were either in the process of being written when he was around or after he left, and the 3 of us worked on new and old riffs, not really knowing if these songs were to see the light of day. We became more passionate and interested as the songs started to come together more and more. As they did, Chris and Rush joined the band to complete these 4 songs to what they are today. So hence forth, ‘Resurrection‘ represents a new day, a new chapter, a new era to the band As Days Fade.

Originally formed in the summer of 2008, the now-quintet has performed alongside Eyes Set To Kill, The Ghost Inside, Texas In July and more, never failing to impress audiences with their theatrical live shows. Consisting of vocalist Blake Thomas, bassist Anthony Augusta, Anthony Brienza and Brandon Rush on guitar as well as newcomer Chris Barenz on the drums, the band has found their winning formula.

Having slayed audiences with 2013’s Carpe Noctem EP, the band is set on further sharing their message of independence and acceptance through channeling harsh realities into something fiercely relatable. Now, with a new line up and their new Resurrection EP set for release on June 3rd, 2016, they are ready to hit the road and continue building their empire.

Resurrection EP Track listing:
1. I Don’t Want You
2. Resurrection
3. Taking Over Me
4. Requiem